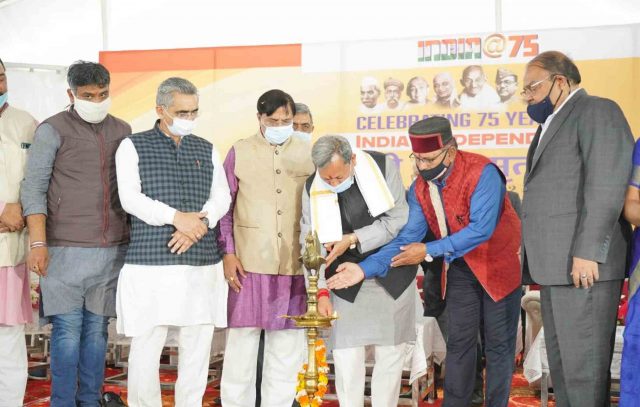 Dehradun, 12 Mar: Chief Minister Tirath Singh Rawat inaugurated the ‘Amrit Mahotsav’ at the Pavilion Ground here, today. The mahotsav is being held to celebrated 75 years of Independence. He also inaugurated an exhibition on the freedom struggle on the occasion. He claimed that the ‘Atmanirbhar Bharat’ envisaged by Mahatma Gandhi was being made a reality by Prime Minister Modi.
He emphasised that all those born after Independence should be aware of the sacrifices made by the freedom fighters. He recalled that this was the day when Mahatma Gandhi had launched the salt satyagrah.
The CM also praised PM Modi’s decisive move to bring J&K into the national mainstream. The British model of education, designed to keep Indians a subject race, was being demolished. The abolition of instant triple talaaq and the ongoing construction of the Ram Janmabhoomi Temple were all signs of the changing times.
Among those present on the occasion were MP Ajay Bhatt, RS MP Naresh Bansal, Mayor Sunil Uniyal ‘Gama’, MLA Khajan Das, Chief Secretary Om Prakash, Secretary, Information, Dilip Jawalkar, and Narendra Kumar Kaushal.