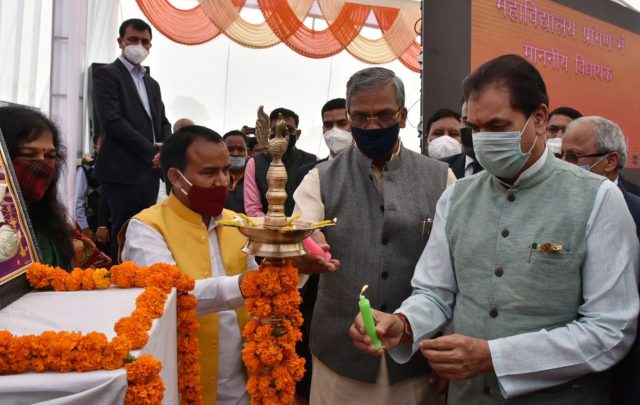 Dehradun, 8 Nov: Chief Minister Trivendra Singh Rawat on Sunday inaugurated high speed internet connectivity and video conferencing facility for the colleges and universities of the state at the Shaheed Durgamall Government Post Graduate College, Doiwala.
Chief Minister Rawat congratulated the people of Uttarakhand for becoming the first state in the country to connect colleges and universities with high speed internet connectivity. He said that youths aspire to connect with the whole world. In this direction, this high speed internet connectivity would prove to be a boon for them.
Through this facility, students of the state would also be able to obtain knowledge from great scholars who have done a lot in their fields. Reminding that the youth are the future of the country, he said they had to decide how to use these facilities properly.
The Chief Minister added that this was an important step towards Prime Minister Narendra Modi’s ‘Digital India’ initiative. The state government is providing high speed WiFi internet connectivity to the colleges and universities of the state through dedicated internet lease lines. He said that the government’s effort was to make the youth self-reliant. They need not only to become self-employed, but also become employable.
He reiterated that the state government was fighting against corruption. As part of this, the secretariat was being connected to the e-office as the internet could play an important role in the field of transparency. Thirty-seven departments of the Chief Minister’s Secretariat had been put online. He reminded that 107 growth centres had been sanctioned in the state, through which the youth were being skilled. The State Government was providing employment opportunities to the youth in the Pirul and Solar Energy sectors. The State Government was protecting the environment by respecting the bounties of nature.
Minister of State for Higher Education Dr Dhan Singh Rawat declared that, after becoming the first state in the country to provide high speed internet connectivity to the colleges and universities, more than 2 lakh students would be the beneficiaries. All 106 colleges and 5 universities of the state would get internet connectivity soon.
Present on this occasion were Vidhan Sabha Speaker Premchand Agarwal, Minister of State for Higher Education Dr Dhan Singh Rawat, MLA Harbans Kapoor, Principal Secretary Anand Vardhan, Chief Minister’s IT Advisor Ravindra Dutt Petwal, Director, ITDA, Amit Sinha and Principal DC Nainwal.