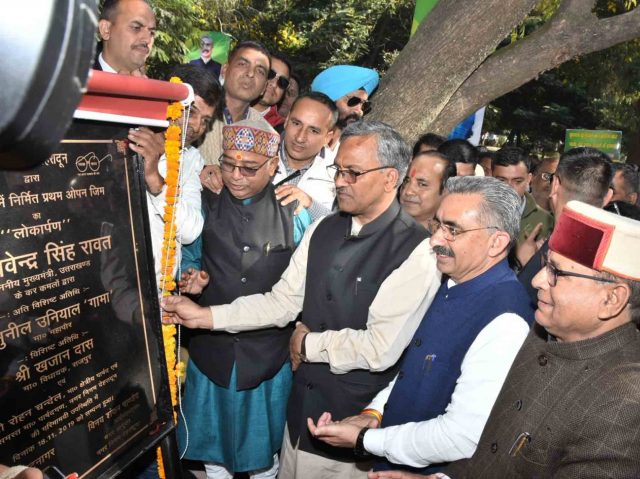 DEHRADUN, 18 Nov: Chief Minister Trivendra Singh Rawat today inaugurated the ‘Open Gym’ at the Gandhi Park, here, which has been developed by the Nagar Nigam. He announced that such gyms would be opened in every ward, which would be a convenience for the public in a city that lacked parks and open spaces. He also revealed that trainers would be present at the gym. Disabled friendly equipment would also be installed. The Chief Minister added that there were plans afoot to turn the stretch of road between Gandhi Park and Clock Tower a traffic-free ‘Zero Zone’ for four hours on Sundays. This would encourage social and cultural activities. Art would also be displayed during this time by artists. He also advised authorities to undertake rainwater harvesting at the park. Rajpur MLA Khazan Das said that many initiatives had been taken in his constituency over the past year. Mayor Sunil Uniyal ‘Gama’ promised to continue making efforts on making Doon a developed city. There would also be camps established once a week at the park to test the blood sugar levels among the elderly.