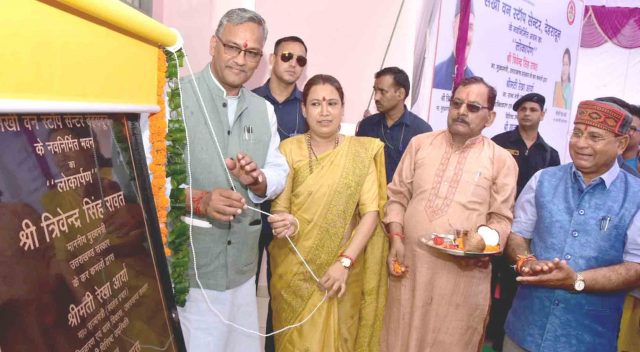 DEHRADUN, 12 Sep: The ‘Sakhi One-Stop Centre’ will provide shelter, a police desk, legal and medical aid, and counseling at one place to women and girls who are victims of any kind of violence. The Centre, set up by the Women Empowerment Department, was inaugurated here, today, by Chief Minister Trivendra Singh Rawat. Finance assistance for this has been obtained from the Union Government and it has been established in the Women’s Hostel campus at Survey Chowk. CM Rawat expressed his gratitude to Union Minister Smriti Irani on the occasion. He pointed out that, on occasion in life, women faced several difficulties and need shelter. The Sakhi One Stop Centres would help women and girls facing such problems. Not only would the necessary facilities be provided, but also a positive environment. He also said that cleanliness was necessary in life and, in the context of menstruation, a must for women. Studies had shown the health complications women faced on not being able to maintain cleanliness during their periods, including cervical cancer. The State Government had also begun a campaign to provide sanitary napkins at cheap rates. Talking about the move to rid children of malnutrition, he reminded that such children were being ‘adopted’ to ensure each of them got personal attention. Children would be given free milk two days a week in the anganwadi centres. The CM also went around the Women’s Hostel. He announced that necessary amenities would be provided there. Women Empowerment MoS Rekha Arya reiterated the government’s resolve to combat violence against women. Present on the occasion were MLA Khajan Das, Secretary Saujanya, Director Jharna Kamthan and others.