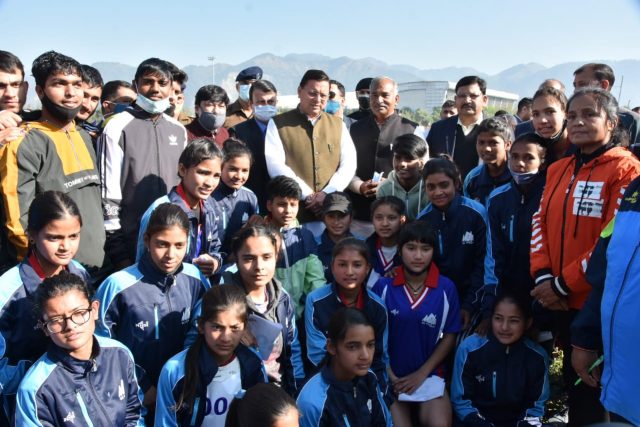 DEHRADUN, 8 Dec: Chief Minister Pushkar Singh Dhami launched the State Level Khel Mahakumbh 2021 at Maharana Pratap Sports College, here today. Sports Minister Arvind Pandey was also present on this occasion. A total of 12 sports disciplines for boys and girls are being organised in three age groups under-14, under-17 and under-21 in this Khel Mahakumbh. On this occasion, the Chief Minister also presented the State Level Vivekananda Youth Awards for the years 2020-21 and 2021-22 to the Mangal teams doing excellent work at the state level, district level and block level. The CM also made several announcements on this occasion. The inaguration ceremony was held this morning. On this occasion, the Chief Minister announced that all the players participating in the Khel Mahakumbh 2021 would be allowed all facilities as per the new sports policy. PRD volunteers would also be given an honorarium of Rs 70 per day on the lines of Home Guard jawans. PRD volunteers would be given the benefit of social security insurance and financial assistance of Rs 2 lakhs. PRD volunteers would be given 300 days of work every year. Addressing all the players participating in the Khel Mahakumbh, the Chief Minister said that the importance of sports was like the light of the sun in one’s life which dispelled the darkness with its first ray. Sports played an important role in inculcating punctuality, patience and discipline in the players. The Chief Minister also shared his childhood memories in the field of sports on the occasion. The Chief Minister said that time played an important role in doing any work. Good use of time was very important in life as it never returned. The Chief Minister said that it was necessary to have an optionless resolution to achieve its objective. The Chief Minister said that the Sports Policy-2021 had been implemented by the State Government to promote sports and sportspersons. In sports policy, to help grooming sportspersons, talent hunt would be carried out and the selected players would be helped at every level wither it was better nourishment, or better employment or the training. Instruction were given to Secretary Sports to very quality check reports of all the construction works done in the past should be given in a week. It ought to be ensured that there was no negligence towards the quality of work. Strict action be taken against the officials showing negligence in the work. While congratulating all the players participating in the state level Khel Mahakumbh, Sports Minister Arvind Pandey said that players were getting a platform by organising Khel Mahakumbh. Searching for talent was being carried out in the field of sports from village level to state level. Efforts had been made to provide all possible facilities to the players in the new sports policy of the state. For this, he also expressed his gratitude to the Chief Minister Pushkar Singh Dhami. He said that the arrangements made in the new sports policy, difficulties faced by the players during training had been resolved.