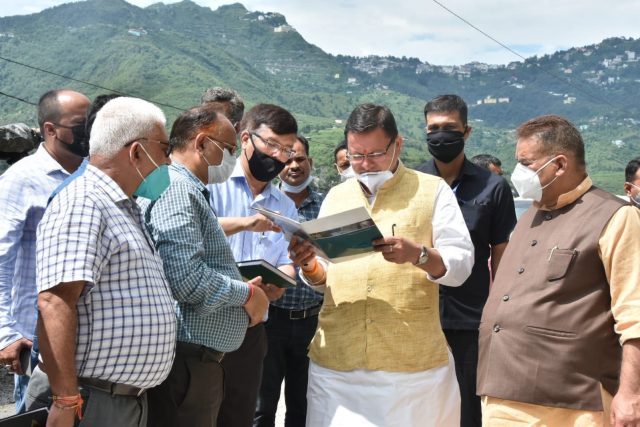 By Our Staff Reporter
Mussoorie, 2 Sep: Chief Minister Pushkar Singh Dhami, along with Cabinet Minister Ganesh Joshi, inspected the site of a continuous landslide near the Galogi Power House, here, today. Top officials of the Public Works Department were also present. Dhami instructed the officials to prepare a plan for the treatment of the mountainside immediately.
He said that Mussoorie is a tourist destination, so road blockage here affected business in multiple ways. Due to the continuous landslide, the local people of Mussoorie as well as tourists faced a lot of problems. He revealed that an offer had been made to treat the mountain by a French company which would be considered.
Minister Joshi said that the French company has a lot of experience in treating damaged mountainsides. He said that the officials of the Public Works Department had been instructed to prepare an action plan for the treatment of the mountain at the earliest, so that the work could be started soon.