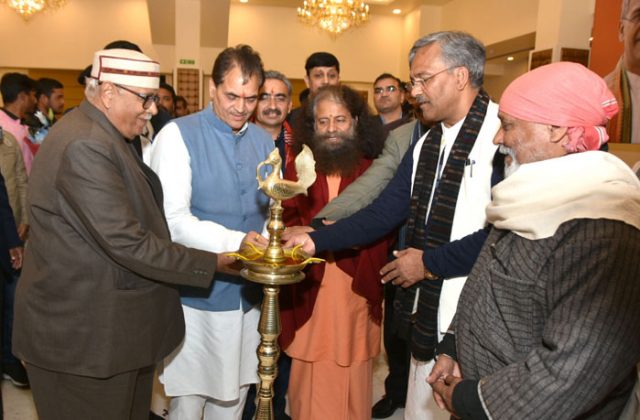 DEHRADUN, 21 Dec: As part of Chief Minister Trivendra Singh Rawat’s birthday celebrations, a book authored by Research Scholar Anup Kumar, titled “Karmanyevadhikaraste Trivendra Ek Parivartankari Netratva”, based on his life, was released at a local hotel late on Thursday. The book was released jointly by Vidhan Sabha Speaker Premchand Aggarwal, MLAs Harbans Kapoor and Munna Singh Chauhan, Mayor Sunil Uniyal ‘Gama’, BJP State President Ajay Bhatt, Padma Shri awardee Anil Joshi, senior leader Sushila Baluni and Basanti Bisht.
A documentary on the Chief Minister was also screened. Chief Minister was extended birthday wishes by a large number of people present at the programme.
While expressing gratitude to all, Rawat said that it was due to the democratic process that a common man born in an ordinary family had got the opportunity to serve the state as the Chief Minister. He had witnessed developments since the start of the Uttarakhand statehood movement till the formation of the state. He claimed he was working with resolve to fulfil the expectations of the people.
Dr Anil Joshi said that the tenure of Chief Minister Trivendra Singh Rawat had been praised by the public. He had set an example of honesty and integrity, and had an understanding of the villages. He expressed the hope that the Chief Minister would understand the plight of the village people.
Vidhan Sabha Speaker Premchand Aggarwal and MLA Harbans Kapoor described him as a qualified and honest CM. Mayor Gama talked of a cleanliness drive for a fortnight in the city on the occasion of birthday of the Chief Minister. Swami Chidanand described the Chief Minister as a skilled, duty-abiding person. BJP State President Ajay Bhatt said the CM did responsible politics and had worked hard at the organisation level.
The author of the book, Anup Kumar, described what had motivated him to write the book. The programme was conducted by Dr NS Bisht.