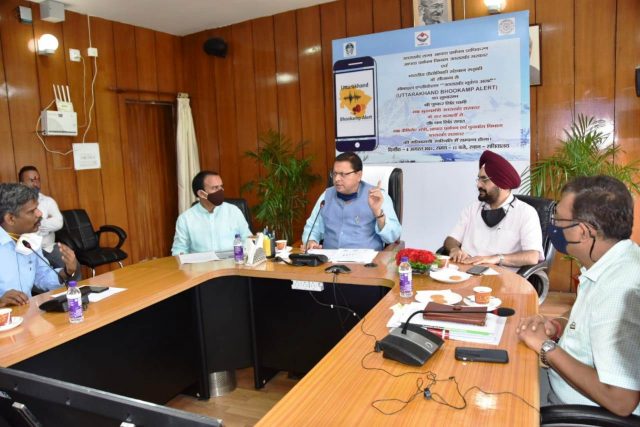 By Our Staff Reporter
Dehradun, 4 Aug: CM Pushkar Singh Dhami launched the mobile application, ‘Uttarakhand Earthquake Alert’, at the Secretariat, here, today. With this, Uttarakhand has become the first state to develop an early earthquake warning app. This app, created in a collaborative effort of the Uttarakhand State Disaster Management Authority and Indian Institute of Technology, Roorkee, will provide warnings before earthquakes.
Dr Piyush Rautela, Executive Director of the State Disaster Management Authority, stated that the authority had given financial assistance for the Uttarakhand Earthquake Alert App. Now after the launch of the app, an annual expenditure of Rs 1- 1.5 crores would be spent to keep the app in operation. This expenditure would be borne by the state government.
Speaking after the launch of the app, Chief Minister Pushkar Singh Dhami observed that Uttarakhand was the first state to make this app and added that it would contribute significantly to public safety. Dhami said that Uttarakhand was an earthquake-prone state and people ought to be informed about this app so that they could get early warning should an earthquake occur. He said that the information on this app would be disseminated widely through various mediums. A short film on this could also be made by the Disaster Management Department for public viewing. Children in schools also ought to be given information about this app. The Chief Minister said that even those who did not have an Android phone would be able to somehow get the warning before the earthquake. This message facility would also be provided through this app. He added that, whenever an earthquake warning would be issued, arrangements needed to be put in place also for alerts by siren and verbally. A separate siren tone ought to be prepared for earthquake warning.
The Chief Minister added that this was a good initiative that could help save a lot of lives.
It was stated that the app would issue an alert in case an earthquake of more than 5.5 on the Richter Scale is expected in any particular area. This app would also help provide the location of people and also disseminate information on property damage on account of the earthquake and regarding people trapped anywhere.

Garhwal Post has established itself as a credible, balanced and forward looking newspaper in India. Based in Uttarakhand, the daily is read by the aware, socially and culturally responsible, high-income elite of society.
Contact us: info@garhwalpost.in
best dating sites for polyamory nerd dating websites