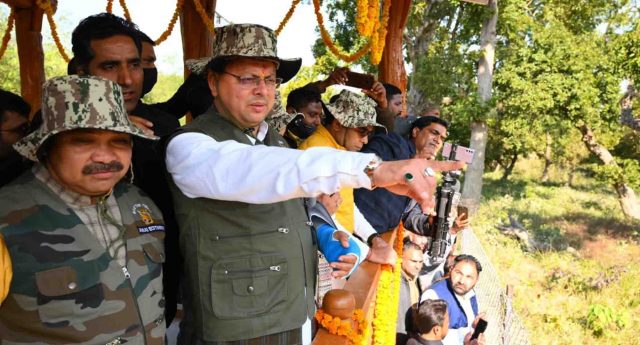 By Our Staff Reporter
Khatima, 29 Dec: Chief Minister Pushkar Singh Dhami today launched the Jungle Safari at ‘Surai Ecotourism Zone’ here. On this occasion, he also undertook the jungle safari ride. Surai Ecotourism Zone is the first such ecotourism zone in the state, where tourists can enjoy jungle safaris.
The Chief Minister said the main objective of this scheme is to make Khatima and its surrounding area a prominent place on the tourism map. The ‘Terai Eastern Forest Division’, with biodiversity and wildlife presence, would be developed in a planned manner and the Surai forest area would be converted into an eco-tourism zone, so that the natural beauty here could be used to provide direct and indirect employment to the local people.
The Chief Minister Dhami said that due to the complexities of the Forest Act, people living near the forests had to face a lot of problems, and even the agriculture activities were affected. He said that realising this difficulty, the government had decided that self-employment opportunities would be provided to the local people by connecting forest and wildlife with the economy. With this thinking, the government had launched the ‘CM Young Ecopreneur Yojana’ in Dehradun on 1 October, this year. The implementation of this scheme has already begun. As a beginning, the jungle safari is being started in Khatima by developing the ‘Surai Ecotourism Zone’. The scheme would be operated through village committees. With the introduction of Jungle Safari, local youth would get employment as safari vehicle owners, drivers and guides. For this, the Forest Department had tied up with 30 Gypsy operators. In order to properly discharge the role of guides, the Forest Department had given training to many youths. The influx of tourists in the ‘Surai Ecotourism Zone’ would provide direct and indirect employment to the local people. This scheme would be expanded in the entire state so that the forests, forest areas and wildlife could be made a strength rather than weakness. He said that professions like nature guide, drone pilot, wildlife photographer, ecotourism, wildlife tourism based skills would be converted into enterprise under the CM Young Ecopreneur Scheme.

Garhwal Post has established itself as a credible, balanced and forward looking newspaper in India. Based in Uttarakhand, the daily is read by the aware, socially and culturally responsible, high-income elite of society.
Contact us: info@garhwalpost.in
free dating sites no charges ever