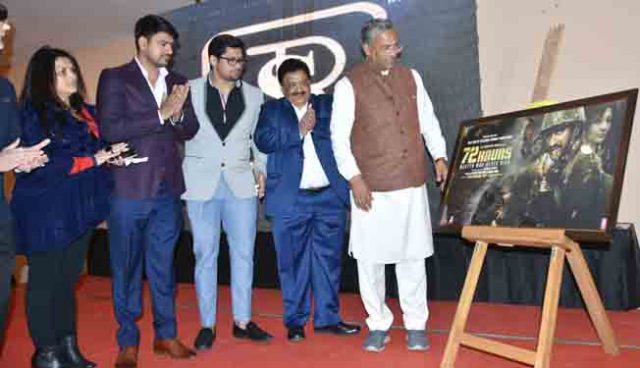 DEHRADUN, 24 Dec: Chief Minister Trivendra Singh Rawat launched the trailer of “72 Hours”, a film based on the life of Martyr Jaswant Singh Rawat at a local hotel on Monday. Chief Minister Rawat said that Mahavir Chakra winner Jaswant Singh Rawat, during the war with China in 1962, showed indomitable courage and valour and killed 300 Chinese soldiers single-handedly. He said it was due to brave persons like Jaswant Singh that Uttarakhand is known as “Veerbhoomi” and brave soldiers always remain immortal.
Rawat said that the state government was working in mission mode to encourage production and shooting of films in Uttarakhand. Famous Directors like Mahesh Bhatt, Raj Kumar Santoshi and others were planning to shoot their films in Uttarakhand. MP Mala Rajyalaxmi Shah, unit members of the film and other dignitaries were present on the occasion.