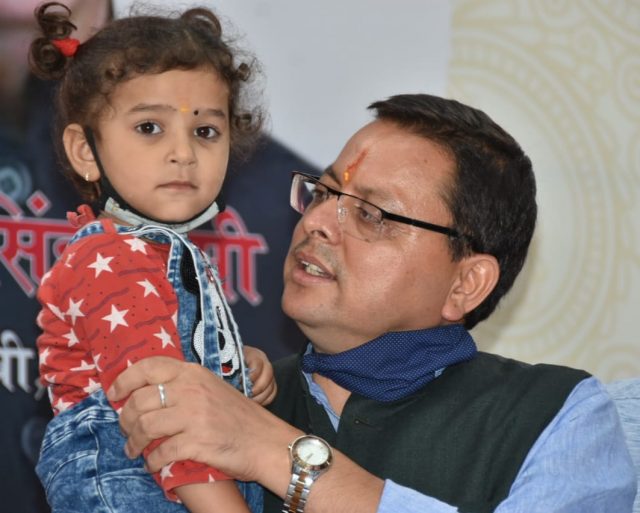 By OUR STAFF REPORTER
Dehradun, 2 Aug: Chief Minister Pushkar Singh Dhami today formally launched the ‘CM Vatsalya Yojana’ that will provide financial aid to children rendered without support because of their parents’ death due to the Covid-19 virus.
The event was organised at the conference hall of the Chief Minister’s official residence. Under the scheme, children will get Rs 3000, each, in their designated bank accounts every month. Present on the occasion were Cabinet Ministers Ganesh Joshi and Rekha Arya, MLA Dhan Singh Negi, Secretary HC Semwal and other dignitaries.
The CM said it was not possible to compensate children for the loss of their parents, but the state government would perform the dues of a guardian. The direct responsibility would lie with the DMs of each district. He asked the children to consider him their ‘uncle’. He articulated the government’s resolve to bring the smiles back on the children’s faces.
He expressed the hope that other children would not face similar loss in the future.
The children will also be provided free ration and education. Five percent across the board reservation would be provided to them in government jobs.
Minister Rekha Arya said the scheme projected the humane face of the government.
On the occasion, the Chief Minister also felicitated Tara and Smriti of Balika Niketan for having passed the Intermediate Exam in first division. The girls of Balika Niketan presented a painting made by them to the CM.
Also present virtually were Speaker Premchand Agarwal, former CM Trivendra Singh Rawat, MLAs Munna Singh Chauhan, Sahdev Pundir, Ram Singh Kaira, Diwan Singh Bisht and others.