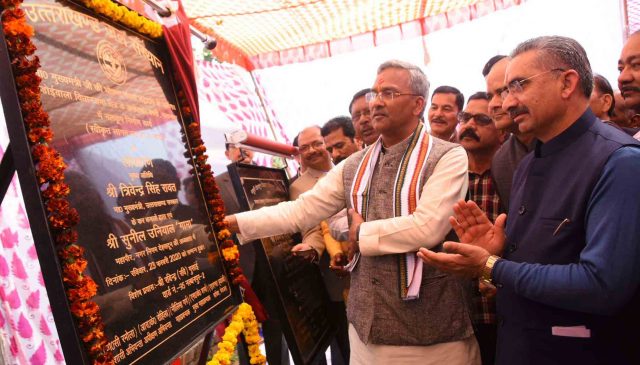 DEHRADUN, 23 Feb: Chief Minister Trivendra Singh Rawat laid the foundation stone of a tubewell to constructed at a cost of Rs 96.33 lakhs near the Vaishno Mata Temple, Nathanpur, in his constituency of Doiwala, today. He similarly laid the foundation stone of a tubewell to be built at a cost of Rs 96.01 lakhs at the Gram Panchayat, Nathanpur. He also dedicated to the public another tubewell that has cost Rs 97.11 lakhs in the Ambedkar Basti there. He laid the foundation stone of a Community Hall at Nathanpur being constructed by the MDDA. On the occasion, he said, that pending work on the Syed Drain in Nathanpur would be completed soon, which would cost about Rs 4.5 crores. He reminded the gathering that water supply in areas around Dehradun would be improved for which work on the Suryadhar Lake was underway. Gravity based supply would be provided from there to around 29 villages. Similarly, land was being made available for the Song Dam, work on which would begin once people are relocated from the area. Work on the dam would be completed in 350 days. He also announced that servicemen would henceforth only need to display their I Cards to enter his official residence and the Secretariat. The state government’s grant to PVSM awarded servicemen would also be raised from Rs 15,000 to Rs 2 lakhs. The grants for VSM and other awards would be similarly raised. The Chief Minister also declared that 5 percent reservation would be provided to children living in government orphanages. He also announced a number of schemes for women. He informed the gathering that in-principle approval had been obtained for a Tejas Train to ply between Delhi and Dehradun, which would only take two and a half hours to cover the distance. Air connectivity was also being enhanced. He praised the CEO, Dehradun Smart City, Ashish Srivastava, for bringing Doon’s national ranking up to 19th. Also present on the occasion was Mayor Sunil Uniyal ‘Gama’.