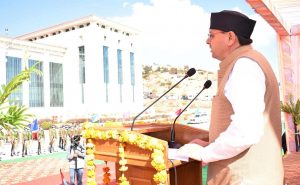 Among the announcements made by Dhami today included a rise in the pension for Uttarakhand state agitationists from Rs 3,100 a month to Rs 4,500 a month for one category, and from Rs 5,000 per month to Rs 6,000 per month for the other category of pensioners.
The CM also announced that a woman or girls’ hostel would be constructed in each district headquarters of the state to facilitate the education of girls living in remote areas, so that they could also study in the district headquarters. In addition, Dhami also announced that a working women’s hostel would also be constructed in each district headquarter of the state. 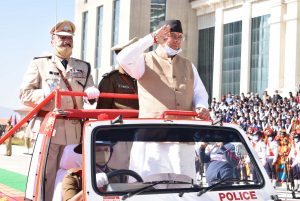 The CM also announced setting up of deaddiction centres in Dehradun and Haldwani to treat youngsters suffering from drug addiction. He also announced a one-time incentive of Rs 10,000 for the NHMs in view of the commendable work done by them during the Covid period. It may be recalled that NHMs are currently agitating in support of their demands. The CM announced that under the Eja-Boi Shagun Yojana, a cash gift of Rs 2000 would be paid to those women who ensured 48 hours stay for delivery of their child in the hospitals or health care centres. 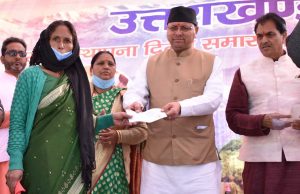 The CM announced that sanitary napkin vending machines would be set up in every Anganwadi centre for adolescent girls in the age group of 11 to 18 years. Better health tests such as for haemoglobin, etc., would also be conducted free of cost for adolescent girls in the age group of 11 to 18 years and free medical consultation would be provided to them through helpline number 104. Another important announcement made by the CM included a scheme called Arogya Uttarakhand under which free medicines would be made available for the treatment of long term and chronic diseases to the poor.
Dhami also announced that a State Institute of Urban Development would be established in Uttarakhand. He added that a Foreign Employment Cell would be established in the state to provide employment opportunities outside the country to the youth. He announced that, in addition to the 32 public services being provided through the e-district portal, more would be added, thus raising the total number to 75. Not only this, very soon, another 190 remaining public services that had been notified under the Right to Services Act would also be provided through Apni Sarkar Portal. The CM said that the “Sports Policy-2021” would be implemented immediately to encourage sports in the state and to connect the youth with different disciplines.
The CM claimed that in order to increase the state’s economy through health tourism, the state would be soon made an AYUSH wellness hub. Under this plan, AYUSH wellness centres would be established in the tourist houses of Garhwal Mandal Vikas Nigam and Kumaon Mandal Vikas Nigam across the state to attract more tourists and wellness tourists.
Dhami also paid homage to all the martyrs of statehood movement and the agitationists. He said that with the special attachment of Prime Minister Narendra Modi for Uttarakhand and the cooperation of the Union Government, Uttarakhand was witnessing rapid development. In the last five years, various projects worth about Rs One Lakh Crores had been sanctioned by the Union Government for the state. Work on many of these projects had been completed while on others it was in progress. He added that the state government’s plan was to connect every village of Uttarakhand with major highways and all-weather roads through link roads by 2025. This would result in infrastructure development so that industrial development could also be ensured in the hills and reduce the chronic problem of migration of the youth from the hills by creating more employment and self employment opportunities. He said that Hemkund Sahib, the holy shrine of the Sikhs situated at the highest altitude of the world, would soon be connected by a ropeway. Along with this, Cable Car service would also be provided to Kedarnath. He added that the state government was also working for the development of Kainchi Dham located in Nainital, under which various development works worth more than 60 crores would be done.
Dhami said that the state had abundant and incomparable natural beauty, on the one hand, but on the other, natural calamities had also been hitting the state from time to time. He also cited the recent excessive rains in the state that had claimed many lives as an example of the challenges that the state faced. He expressed deep condolences to the families of all those who lost their lives in the recent calamity. He claimed that the State Government was determined to deal with the disasters on a war footing. Due to this resolve, many lives could be saved and timely rescue operations could be undertaken during the recent calamity. He also appreciated all the departments including the Police and SDRF for helping the people by always being available at the time of disaster.
The Chief Minister said that the entire country had battled the Corona pandemic for the last two years and with the inspiration of Prime Minister Narendra Modi, the world’s largest free COVID Vaccination campaign was being conducted. Recently, the country had crossed the milestone of administering 100 crores vaccine doses. Under the guidance of the Prime Minister, Uttarakhand had become the first state to administer the first dose of COVID-19 vaccine to all citizens above 18 years. The target of 100 percent second dose would also be achieved soon, he promised.
The Chief Minister said that the entire tenure of the State Government had been dedicated to the development of remote and backward areas. This was the first government which took the problem of migration seriously and took many important decisions aimed at reverse migration. Special focus had been given to the service sector including tourism, AYUSH and wellness, IT, solar energy for investment in hill areas. The “Mukhyamantri Seemant Kshetra Vikas Yojana” had been started for border and remote tehsils and growth centres were being set up in all Nyaya Panchayats on a cluster based approach. An attempt had been made to create self-employment opportunities for the local people through the “One District, Two Product” scheme based on Vocal for Local. The home stay scheme launched by the government was also strengthening the rural economy, he claimed.
The Chief Minister said that, in accordance with the expectations of Prime Minister Narendra Modi, by the year 2025, when Uttarakhand would be celebrating the silver jubilee year of its establishment, it would be among the best states of the country and the government was fully committed to make it happen. The government was working day and night through which the ultimate goal of Antyodaya could be achieved to make Uttarakhand a true land of the Gods.