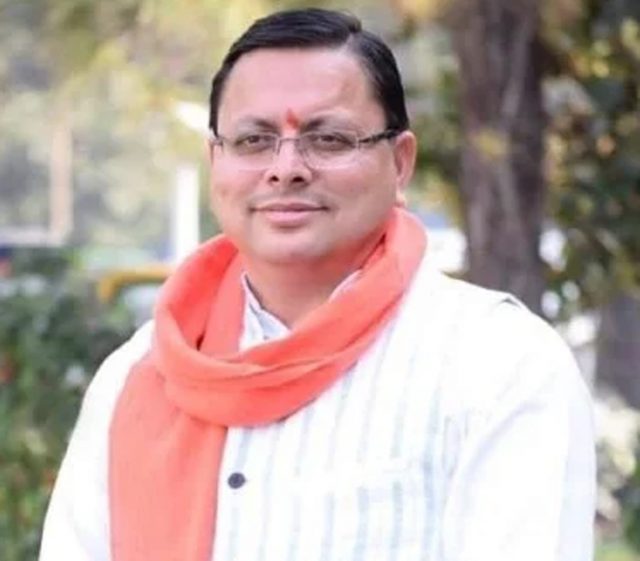 By Our Staff Reporter
Dehradun, 18 Sep: Chief Minister Pushkar Singh Dhami participated in Jan Ashirwad Rally in Rishikesh today, where he made around 12 announcements keeping in view the upcoming elections. Dhami promised that an overbridge would be constructed at Shyampur railway gate. He also said that  Sanjay Lake located in Rishikesh would be beautified and developed as a tourist spot. Adventure tourism and water sports would be started on the lake located at the barrage. Another major announcement is related to construction of multi-storey parking in Rishikesh. He also announced that in Rishikesh, the flow of river Ganga would be brought to Triveni Ghat in a continuous and systematic form.
The CM added that under CAMPA scheme, roads and electricity and other necessary facilities would be provided in villages adjoining forests like Satyanarayan Mandir to Gauharimafi, Sahabnagar, Bhattowala, Rushafarm (Gumaniwala). Arrangements would be made for the safety of life and property of the residents of leopard attack prone areas of Raiwala, Sahabnagar, Khadri. In areas like Khadri, Lakkadghat, Gumaniwala, Rushafarm, Bhattonwala, Chhidarwala, etc., arrangements would be made for protection from elephants and other wildlife. Effective action for flood protection would also be initiated soon in the flood affected areas of Gauhari Mafi, Sahabnagar, Thakurpur (Khairikhurd), Gadhimayachak.
The CM also promised that a Hi-tech mini stadium would be constructed in rural areas. He also promised that an amount of Rs 20 crore would be released from the state plan for the construction of roads in Rishikesh. Cow shelters would be established for shelter to needy cows.
Chief Minister Pushkar Singh Dhami said that he was feeling proud in visiting the city of Yoga and on being warmly welcomed by the people of Rishikesh. Rishikesh was a placed blessed by the Holy Ganga. He said that work of railway line from Rishikesh to Karnaprayag was going on at a rapid pace. He said that the government had started large scale recruitment drive to fill the vacancies in the government and the recruitment would be completed soon.
For speedy resolution of public problems, the officers had been instructed to hear public complaints from 10 am to 12 am on every working day and solve them. Special attention was being paid to simplification, resolution and disposal of tasks. Various public welfare schemes being run by the government are being made accessible to the general public through camps in the districts.
Chief Minister Pushkar Singh Dhami claimed that the state would become a leading state in various fields in the next 10 years. Speaker Premchand Aggarwal, BJP State President Madan Kaushik, Mayor Anita Mamgain and public representatives were present on the occasion.

Garhwal Post has established itself as a credible, balanced and forward looking newspaper in India. Based in Uttarakhand, the daily is read by the aware, socially and culturally responsible, high-income elite of society.
Contact us: info@garhwalpost.in
female hookup app https://garhwalpost.in/memphis-tn-singles/ dating an army guy