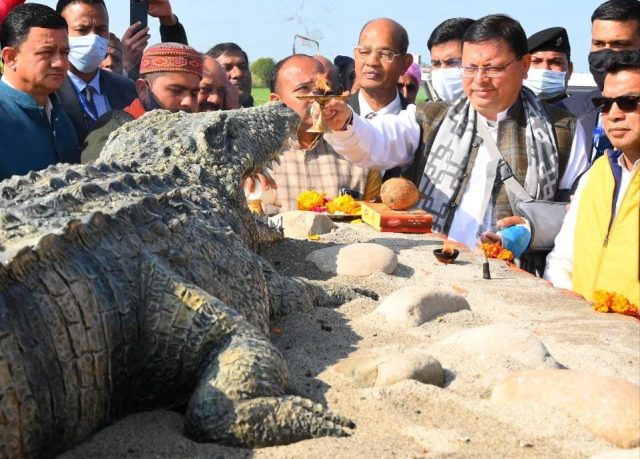 By Our Staff Reporter
Khatima/Dehradun, 29 Dec: Chief Minister Pushkar Singh Dhami inaugurated the Kakra Crocodile Trail in the Terai Eastern Forest Division in Khatima, today. On this occasion, he directed the officials to prepare a DPR at the earliest to connect the Kakra Crocodile Trail with the main road. He further directed that a Park and canteen be constructed on the Kakra Crocodile Trail area very soon.
The Chief Minister said it was an innovative initiative of the BJP government so that the local people get more employment opportunities by connecting with forests, forest areas and wildlife. With the creation of the Crocodile Trail, where there would be conservation and promotion of crocodiles in their natural habitat, tourism activities would also be encouraged. Its establishment would generate employment and economic activities. He said that it would help, both, the ecology and the economy. Local people would get employment and efforts would also be made to increase tourism activities in the area through homestays. He said that tourists visiting the area would get good air, climate and environment along with crocodile safaris.
The Chief Minister said that, along with employment, it was the goal of the government to increase self-employment. On this occasion, he called upon the local people to take maximum benefit of the home stay scheme.

Garhwal Post has established itself as a credible, balanced and forward looking newspaper in India. Based in Uttarakhand, the daily is read by the aware, socially and culturally responsible, high-income elite of society.
Contact us: info@garhwalpost.in
couples dating sites canada sexy women dating site