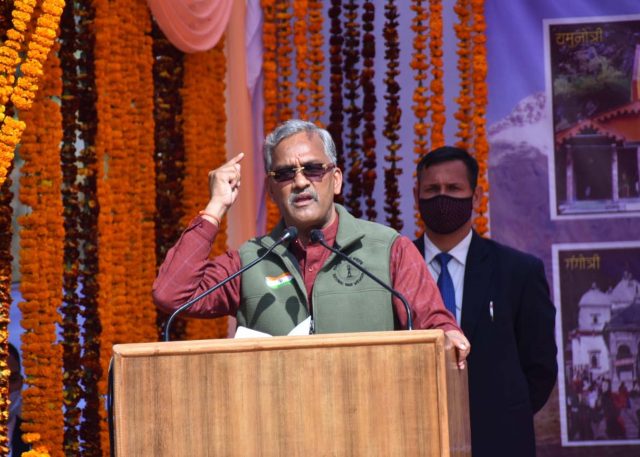 By Arun Pratap Singh
Dehradun, 23 Jan: Chief Minister Trivendra Singh Rawat laid the foundation stone of the state-level Sainya Dham, an army memorial in Purkul village here today. On this occasion, the CM also announced hike of one time lump sum grant to the dependents of martyred soldiers from Rs 10 lakh to Rs 15 lakhs. He announced that the lump sum grant of Rs 10 lakh to the widows /dependents of soldiers and paramilitary forces martyred in various wars and or other internal security related conflicts would be increased to Rs 15 lakh  from Rs 10 lakhs at present. He added that the Sainya Dham would symbolise the courage, valour and sacrifice of the Indian Army.
On this occasion, he also laid the foundation stone of the new headquarters of UPNL (Uttarakhand Purva Sainik Kalyan Nigam Limited), an organisation that helps rehabilitation of ex- servicemen and their dependents .
The Chief Minister said that the Sainik Dham would be developed as the fifth Dham of Uttarakhand which was the dream of Prime Minister Narendra Modi who had given the name of Pancham Dham to Sainya Dham, after which efforts to turn this dream into reality were paced up. He said that it was the endeavor of the government to make this memorial a lively and awakened place. Those coming here to visit the Dham would be able to feel a sense of reality and feel inspired by it. Rawat said that he wanted that the new governments coming to power in Uttarakhand take their oath in this place so that they get inspired to serve the state.  Those visiting the state capital Dehradun from any other state or country ought to certainly visit the Sainya Dham. He said that the soil and rocks from the villages of the martyrs in Uttarakhand ought to be brought here as a mark of respect and placed here. Similarly, soil and rocks from the sacred rivers and religious shrines of the state be also brought here. He said that some of articles belonging to the martyred soldiers from the state which presently could be in the possession of their families ought to be placed here in a special museum to be built for this purpose in the Sainya Dham so that they could be protected and their memories continued to inspire the visitors. He said that the concept behind the Sainya Dham was to keep inspiring the countrymen towards serving the country.
He also praised the two regiments connected with the states, Garhwal Rifles, Kumaon Regiment and Gorkha Regiment  and said that they had the capability and the strength to defeat any enemy. The CM once again reminded the gathering that Uttarakhand was a Devbhoomi (sacred land) and a Veerbhoomi (land of the brave). Whenever the country needed, the soldiers from this land gave everything to serve the country and showed highest level of bravery. He said that for those who wanted to join the army, training would be arranged here. The visitors would also be able to participate in adventure  related activities here. Suggestions would also be invited to build this grand memorial in Dehradun. An experts’ committee would look at all these suggestions, and see that relevant suggestions were taken up for implementation. All people were welcome to send their suggestions to Additional Chief Secretary Sainik Welfare.
MLA Ganesh Joshi said that under the leadership of Chief Minister Trivendra Singh Rawat, the State Government had taken several important decisions towards the welfare of the soldiers. To resolve the problems of soldiers and ex-servicemen, Additional Chief Secretary at the state level and Additional District Magistrate at the district level had been posted as nodal officers. Instructions had been given to all district magistrates for quick resolution to the problems of soldiers and ex-servicemen. The state government had made arrangements to accommodate a family member of martyred soldiers and para military personnel in government jobs according to  merit. Soldiers and ex-servicemen were not required to make separate admit cards for entering the secretariat. They were permitted to enter the secretariat with their I Cards only. The government had also decided to provide annual grants to the soldiers and their widows who had received gallantry medals for their entire lives in place of 30 years time period at present. In the services of the State Government, a horizontal reservation of 5% in vacancies of Group ‘C’ had been allowed to to ex-servicemen.
On this occasion Forest and Environment Minister Dr Harak Singh Rawat, Minister of State for Higher Education Dr Dhan Singh Rawat, Mayor Sunil Uniyal Gama, MLA Harbans Kapoor,  Surendra Singh Negi, former Minister Cabinet Minister Lt General (Retd) TPS Rawat, Military Advisor to Chief Minister Lt General (Rtd) JS Negi, MD UPNL Brigadier (Rtd) PPS Pahwa, Director Sainik Welfare Brigadier (Rtd) KB Chand, DM Dehradun Dr Ashish Srivastava and other military officials were also present.