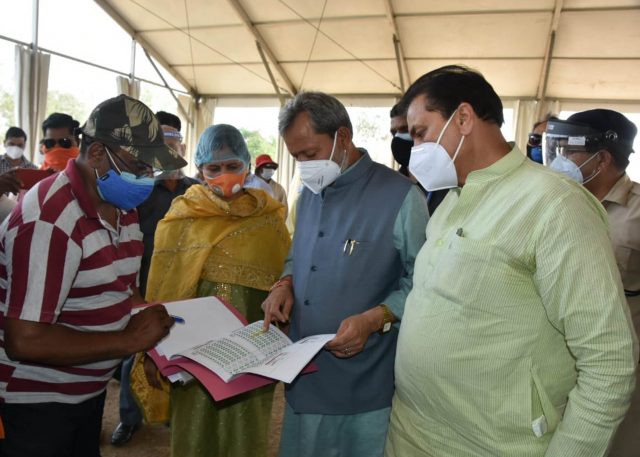 Rishikesh, 7 May: Chief Minister Tirath Singh Rawat today carried out an inspection of the under-construction 500 bed hospital at IDPL Rishikesh, which is being established by the DRDO. He was shown the entire layout of the hospital by the DRDO officials present.
He was told that the hospital had been divided into 2 sectors, each with 250 beds. It would have a liquid petroleum plant and 24 hour electricity back-up. There would be a pharmacy and laboratory.
The CM urged them to take up the construction on war-footing. He promised the state government’s cooperation in the project. He also acknowledged the Union Government’s help in the fight against Covid.
Later, the CM visited AIIMS Rishikesh and interacted with the Director, Professor Ravikant and his team. He asked the Director to inform the administration twenty-four hours in advance for oxygen requirements to avoid panic. He also thanked the doctors and other staff for their fight against the pandemic.
The Director informed him that the hospital needed a 40,000 litre oxygen plant as the present one had limited capacity. Also present were Speaker Premchand Agarwal and Rishikesh Mayor Anita Mamgain.