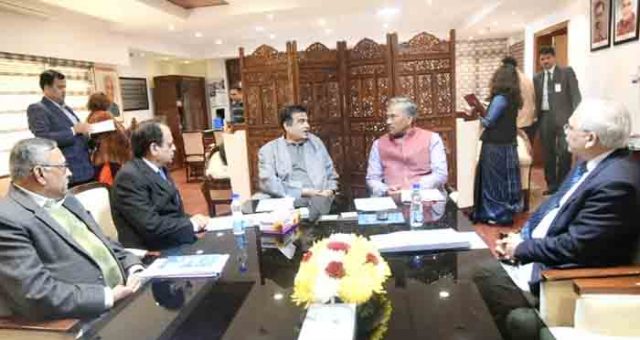 DEHRADUN, 17 Dec: Chief Minister Trivendra Singh Rawat met Union Minister of Road Transport & Highways and Water Resources Nitin Gadkari in New Delhi on Monday.
The Chief Minister urged the Union Minister to link the route from Herbertpur to Badkot (National Highway No. 123) and Kotdwar to Srinagar (National Highway No. 119) with the All Weather Road. In addition, he requested that, in the context of the Kumbh Mela to be held in Haridwar in 2021, approval be given for the construction of a 4-lane bridge near Jagjitpur, Kankhal, on River Ganga and a 47-km long ring road in Haridwar (approximate cost Rs 1566 crores). He said that, in the current fiscal year, financial and administrative approval of 25 proposals worth Rs 284.11 crore under Central Road Fund wass also required.
The Chief Minister told the Union Minister that, in the 123rd TSC of the Central Water Commission, several flood protection schemes for the state had been approved. These included flood protection works of Rs 98 crores on the banks of Suswa River, flood protection works of Rs. 33.95 crores on Jakhan river, flood protection work of Rs 34.25 crores on Song river and flood protection works worth Rs 46.42 crore on Bindal river. He urged the Government of India to immediately provide financial approval for the above works.
He revealed that, this year, a record number of pilgrims came to Uttarakhand for the Char Dham Yatra. The Yatra was also the priority of the Government of India. To make the journey safe and easy, work on the All Weather Road is progressing fast. He apprised the Union Minister that a large number of pilgrims coming from Uttar Pradesh, Haryana, Punjab, Himachal Pradesh and Delhi used the 111-km long route from Herbertpur to Badkot (National Highway No. 123) and 137-km long route from Kotdwar to Srinagar (National Highway No. 119). He said that for the ease of the pilgrims, there was a need to link both these routes with the All Weather Road and in accordance with the Char Dham road project.
Rawat informed the Union Minister that, while prioritising the proposals sent in the past, in the current financial year, 25 proposals of Rs 284.11 crore under Central Road Fund had been sent by the Uttarakhand Government for financial and administrative approval. These included 9 works related to road safety at a cost of Rs 25 crore and 16 proposals on roads and bridges costing Rs 258 crores. Union Minister Nitin Gadkari promised necessary action.