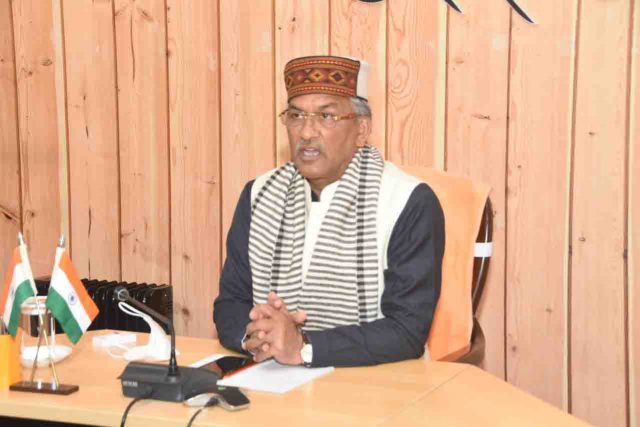 By Arun Pratap Singh
Dehradun, 18 Dec: Less than 48 hours after Almora MP Ajay Bhatt tested Corona positive, now Chief Minister Trivendra Singh Rawat, too, has tested positive. He shared this information on Twitter, today, and appealed to all who had come in touch with him to get tested.
In his tweet, Rawat shared that he had got tested for Corona this morning and the report had turned out to be positive. He added, however, that he was asymptomatic and had decided to opt for home isolation on the advice of doctors. He appealed to all those who had come in contact with him in the past few days to get tested and isolate themselves.
It may be recalled that Minister of State Rekha Arya too had a few days ago tested Corona positive.
With the three day winter session of the state assembly beginning on 21 December, it will not be easy for the government to manage in the CM’s absence. As it is, Rawat holds charge of more than 40 departments including several very important ones like PWD, Health, Industry, Drinking Water, etc. Of course, the Parliamentary Affairs Minister usually responds to the questions involving departments held by the CM, but then there is no permanent Parliamentary Affairs Minister in this government following the death of the then Parliamentary Affairs Minister Prakash Pant one and a half years ago. Madan Kaushik holds interim charge of the department.
At present, there are three cabinet berths vacant in the Trivendra Singh Rawat Ministry, two of them having remained so ever since Rawat took charge as CM, while one fell vacant following the untimely death of Prakash Pant. Despite officially claiming so on multiple occasions, the CM does not seem to have taken any initiative towards filling up these vacancies.
It may be recalled that Almora MP Ajay Bhatt had tested positive two days earlier, as had Minister of State Rekha Arya. It may further be recalled that BJP’s National President JP Nadda, too, had tested Corona positive days after a four day tour of Uttarakhand. It should be a matter of concern that leaders, especially those from the ruling BJP, have been continuously appealing to the people to follow the SOPs regarding the pandemic, namely wearing masks and keeping a physical distance of two metres, they themselves have tended to ignore these. Nor do they seriously keep their mobiles on alert mode with the Arogya App.
In view of the Covid situation, the government had appealed two days earlier for the MLAs to participate in the coming winter session of the House in virtual mode, but most MLAs are learnt to have refused to do so. Furthermore, the Congress leaders had even asked the government to hold an eight day winter session of the assembly instead of the proposed three days. As the House is woefully small, it appears that all the galleries would be used to seat the members so that physical distance could be maintained between the members during the sitting.
Speaker Premchand Aggarwal, too, had stated that no one would be permitted in the House without having a Covid-19 negative report. He had also appealed to the former members of the House not to visit the Vidhan Sabha building during the session.