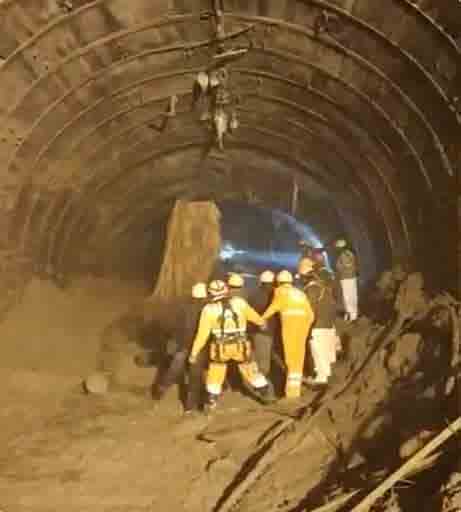 By Our Staff Reporter
Dehradun, 10 Feb: Chief Minister Trivendra Singh Rawat today obtained information from the Disaster Management Secretary on the latest developments in the search and rescue operation underway in Joshimath. He issued instructions that the efforts should continue unabated and arrangements made to ensure there was no shortage of daily essentials in the affected area. He ordered that compensation be paid without delay to the dependants of those who have died. He asked that DNA samples of the deceased who could not be identified by preserved for future action.
He also paid tribute to Head Constable Manoj Chaudhary and Constable Balbir Singh Gadiya, who had died in the disaster. The two were cremated, today, with full state honours.
In the meanwhile, search and rescue operations continued at the disaster site for the fourth day, today. According to the State Emergency Operations Centre, 34 bodies have been recovered and 170 persons are still missing. Two Rishi Ganga Company employees thought to be missing earlier have been found safe at their homes. Work on clearing the tunnel in Tapovan is ongoing, where between 25 and 35 persons are believed to be trapped. Searches are also being conducted for missing persons along the Alaknanda River.
With road connectivity having snapped with 13 villages, 360 families have been affected. Essentials are being supplied to them by helicopter.
Power supply has been restored in all these villages except Pang and Murada. Solar lights have been sent to these two villages by UREDA. Water supply has been restored in eleven villages, work is underway in the remaining one.