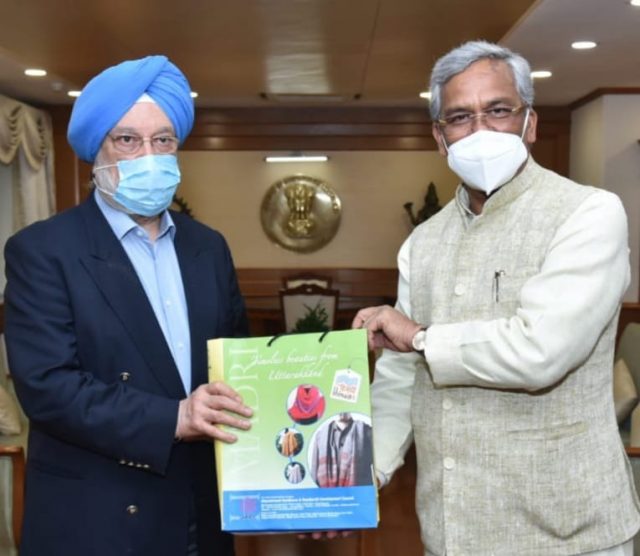 By Our Staff Reporter
Dehradun, 22 Feb: Chief Minister Trivendra Singh Rawat called on Union Minister of Civil Aviation and Urban Development Hardeep Puri in New Delhi today. At the request of the Chief Minister, the Union Minister said that under the Udaan scheme, Dehradun-Pithoragarh-Hindon route and Sahastradhara-Chinyalisaur-Gauchar route would be re-tendered so that the air services could be regularised for these routes. The Union Minister further agreed that expert services would be provided by the Airports Authority of India to make Pantnagar a Green Field Airport of international standards. A survey of the Nainisaini airstrip in Pithoragarh district would also be conducted by the Airports Authority of India.
Puri, who also holds the charge of Urban Development, approved the proposal to include all big and small cities of Uttarakhand in the Jaljeevan Mission of the Centre.
Rawat urged the Union Minister for a change in route and point to point air services in Kumaon and Garhwal divisions under the Udaan scheme, which Puri agreed to. In addition, the Union Minister also accorded sanction for the state aircraft B-200 being given on dry lease to a Non Scheduled Operator Permit agency.
In an important move, the Chief Minister requested the Union Urban Development Minister to raise central aid share for Uttarakhand in the schemes proposed in the Swachh Bharat Mission 2.0 to 90 percent. The Chief Minister told the Union Minister that out of the 15 cities of Uttarakhand that were located adjacent to river Ganga, only Haridwar was currently covered under the AMRUT scheme. In the Swachh Bharat Mission 2.0, approval of sewage management plans for the remaining 14 Ganga cities should be approved with 90 percent central share in the expenditure. The Chief Minister reminded that under the Swachh Bharat Mission, 35 percent viability gap funding was allowed as a plan for solid waste management. In view of the difficult terrain and limited resources of Uttarakhand, 90 percent central share in the Solid Waste projects in the state had to be considered, Rawat urged. He added that proposals for Legacy Waste for cities with less than one lakh population be also be approved in Swachh Bharat Mission 2.0 as many of the hill towns had smaller populations.
The Chief Minister observed that plants needed to be set up in Uttarakhand cities for construction material waste and rubble waste management and, in the first phase, such plants could be set up in all the district headquarters and municipal corporations of the state. For this, the Chief Minister requested the Centre to sanction funds under Swachh Bharat Mission 2.0 or some other Centrally Funded Special Scheme.