Dehradun, 7 Jul: A delegation led by International President of Rotary Club International, Shekhar Mehta called on Chief Minister Pushkar Singh Dhami at the Chief Minister’s residence here today. On this occasion, Rotary Club’s cooperation to the state government in Uttarakhand in education, health, environment and water conservation and other areas was discussed in detail. 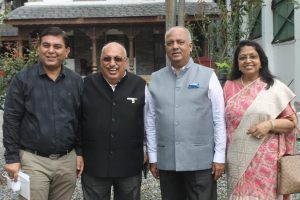 Chief Minister Dhami said that the State Government was working hard towards providing self-employment to the youth. He sought the cooperation of Rotary Club towards this and wanted to know how could Rotary Club help the state. The Chief Minister observed that Rotary could help the state in arresting the trend of migration from marginal and rural areas in Uttarakhand to the cities and other states. He said that it was necessary to stop the migration from the border areas of Uttarakhand. The people living in these areas had a special role as border guards. During the meeting, discussions were also held on providing telemedicine facilities to remote areas of the state, e-learning, martial arts training for girls and literacy campaign amongst other issues. 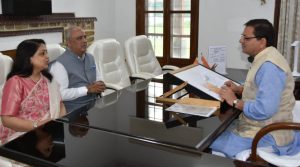 International Rotary Club President Shekhar Mehta while praising the Chief Minister for promoting saplings instead of bouquets as a gift informed him that 10,000 saplings would be planted in Uttarakhand by Rotary Club. He said that every effort would be made to extend all possible cooperation to the state government by the club. The state government would be supported in the direction of telemedicine facility, organisation of health camps, distribution of learning material to increase literacy, eradication of malnutrition, martial arts training and water conservation. Necessary cooperation would be given after considering what could be done to boost theh and other dignitaries from Rotary International were present on this occasion.