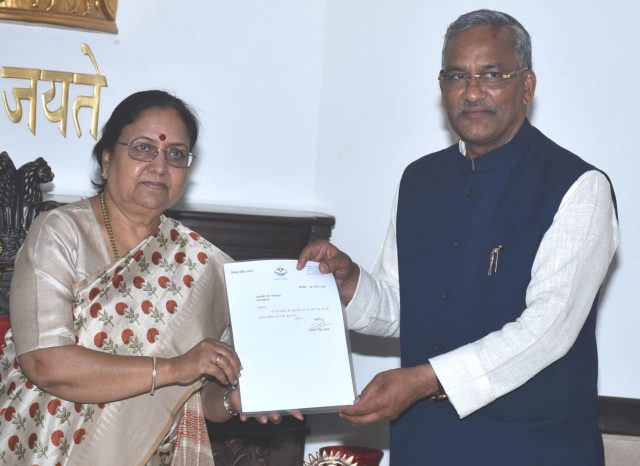 By Arun Pratap Singh
Dehradun, 9 Mar: As was being speculated over the past few days, Chief Minister Trivendra Singh Rawat’s innings as CM has ended days before he could even complete four years of his tenure. While the party high command would have already decided on the name of the new CM, the formal announcement in this regard will be made only after the meeting of the ruling legislative party to be held at 10 a.m., tomorrow.
Rawat, who had yesterday rushed to Delhi to meet the party president and some other senior party leaders, returned to Dehradun at around noon, today. At 4.15 p.m., he called on Governor Baby Rani Maurya and submitted his resignation. Later, he addressed a press conference.
Those leading the race according to party sources are Rajya Sabha MP Anil Baluni, Lok Sabha MP Ajay Bhatt and Minister of State Dhan Singh Rawat. Some other names including those of senior Cabinet Minister Satpal Maharaj and Union Minister Ramesh Pokhriyal ‘Nishank’ are doing the rounds. However, party sources in Delhi claim that the party high command could very well spring a major surprise as far as its choice for a new face is concerned. They claimed that there was little chance that the party high command would place its bet on a junior leader at a time when elections are less than a year away in the state! They further claimed that the cabinet would also be reshuffled in a big way by the new CM! As far as speculation is concerned, Pushkar Singh Dhami’s name is also doing the rounds as Deputy Chief Minister, but party sources in Delhi claim that this is merely speculation and the choice of the party high command could well be a senior party leader.
It is pertinent to point out that the party high command also held a meeting in New Delhi on the political situation in Uttarakhand this evening, following which the party observer for Uttarakhand, Dr Raman Singh, and the second party observer, Dushyant Gautam, left Delhi for Dehradun. Raman Singh and Dushyant Gautam will stay in Dehradun tonight and conduct the meeting of the BJP Legislative Party, which will be attended by the party MPs in addition to the MLAs, tomorrow, to finally get them to nominate a new leader of the Legislative Party. Most of the party MLAs whether in Delhi or in their respective constituencies are also rushing to Dehradun.
The speculation that the chief minister could be replaced was sparked off suddenly when party observer Raman Singh rushed to Dehradun on Saturday and chaired a meeting of the party’s core group. Due to the sudden summoning of the meeting, the government abruptly announced the end of the budget session of the state assembly on 6 March, itself, although it was scheduled to end on 11 March. Raman Singh, who had according to the party sources rushed to Dehradun from Raipur in Chhattisgarh where he was attending the budget session of the Chhattisgarh state assembly as the leader of the opposition on the direction of the party high command, had met several party MLAs and the CM separately. Though the Trivendra Singh Rawat camp tried to create an impression that all was well in the party in Uttarakhand, hectic political activities started post this meeting. At least a dozen odd party MLAs were seen camping in Delhi, though a majority of these were the ones considered to be close to Rawat. Rawat tried his best to convince the party president that the opposition within the party was due to his ‘zero tolerance of corruption’ but this did not cut much ice. He was told to return to Dehradun and wait for the Centre’s decision.
Party sources in Delhi state that when Rawat realised his innings had come to an end, he proposed the name of his close confidante, Dhan Singh Rawat, to take his place. When it was pointed out that Dhan Singh Rawat was the junior-most in his council of the ministers, Trivendra Singh Rawat reportedly claimed that Anil Baluni was also not that experienced and had not even won a single direct election. He further insisted that the next chief minister be from among the existing MLAs. It, however, remains to be seen if the BJP’s Central leadership would pay heed to Rawat or prefer to nominate an experienced name as the new CM.
Incidentally, ND Tiwari remains the only chief minister in Uttarakhand to have completed his tenure in the twenty-one year history of Uttarakhand state, thus far!