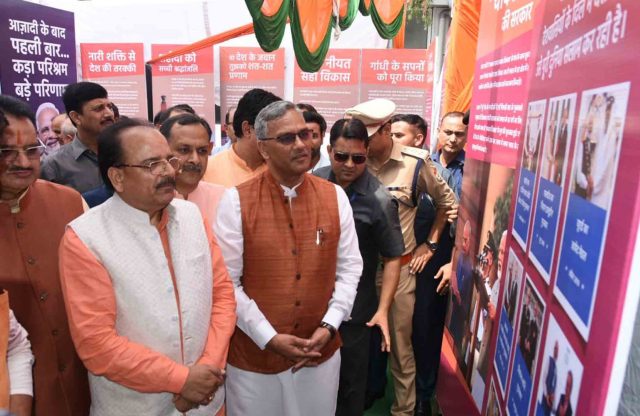 DEHRADUN, 17 Sep: Chief Minister Trivendra Singh Rawat inaugurated a photo exhibition organised at the BJP State Headquarters here, today, on the occasion of Prime Minister Narendra Modi’s birthday. The Chief Minister pointed out that the PM was popular in India and the world because of his unique work ethic. The BJP was celebrating the occasion by observing a ‘Sewa Saptah’ from 14 to 20 September. This involved distributing fruit among patients in hospitals, distribution of blankets, blood donation and cleanliness campaigns. He urged those present to work hard on making the PM’s campaigns a success. He recalled that Prime Minister Modi had always understood the need for developing road connectivity and basic infrastructure in Uttarakhand particularly because of the large number of pilgrims visiting the Char Dhams. This was why the state, today, was progressing in terms of road, rail and air connectivity. The number of pilgrims was increasing by the year. The country too was advancing under the PM’s leadership. He was promoting the nation’s identity around the world. Present on the occasion were State President and MP Ajay Bhatt, MP Mala Rajya Laxmi Shah, Tourism Minister Satpal Maharaj, Education Minister Arvind Pandey, MLAs Khajan Das, Ganesh Joshi, Vinod Chamoli, GIG Mann and others.

Garhwal Post has established itself as a credible, balanced and forward looking newspaper in India. Based in Uttarakhand, the daily is read by the aware, socially and culturally responsible, high-income elite of society.
Contact us: info@garhwalpost.in
women seeking men manhattan https://garhwalpost.in/flirt-with-random/ top dating app in australia