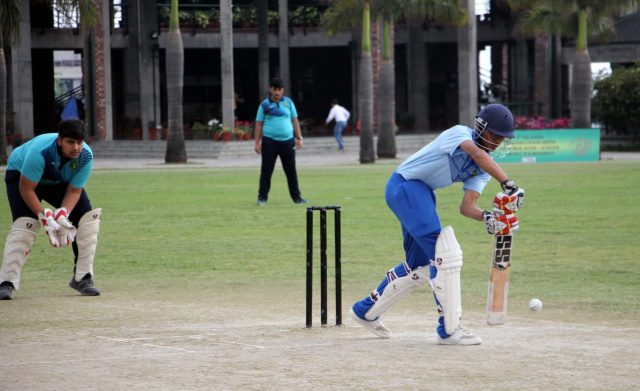 By OUR STAFF REPORTER
Dehradun, 21 Apr: Two matches were played in the 4th PC Batta Memorial Inter School Cricket Tournament in the premises of Kasiga School, here, on Sunday. The first match was played between Gyan Ganga, Pune, and CMS Lucknow. The toss was won by Gyan Ganga which decided to bat first. Under the captaincy of Param Nankani, te team scored 91 runs in 20 overs. City Montessori Lucknow under the captaincy of Shivansh Dixit won by 9 wickets. The Man of the Match Award went to Shivansh Dixit.
The second match was played between Welham Boys and Vidya Jain, Delhi. The toss was won by Vidya Jain, which decided to field first. Under the captaincy of Rajveer Sikka, Welham Boys School scored 161 runs in 20 overs. Vidya Jain School under the captaincy of Karan Garg could only score 144 runs in 20 overs. Welham Boys School won by 17 runs. The Man of the Match Award went to Arya Mitra for his outstanding performance.
The Umpires for today’s matches were Sharik, Mohit and Chandan. The scorer was Ashish Singh.