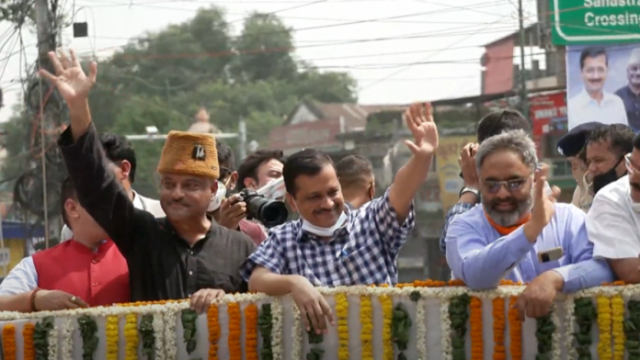 By Our Staff Reporter
Dehradun, 17 Aug: Delhi Chief Minister and Aam Aadmi Party Convenor Arvind Kejriwal today announced at a press conference, here, that the ‘chief ministerial’ face of his party in Uttarakhand would be Colonel Ajay Kothiyal (Retd) for the coming assembly elections. He declared that the state needed not a leader but a patriot.
Kejriwal also held a roadshow in the afternoon with Col Kothiyal and a large number of AAP activists. The attempt was made to establish the party’s presence in the state and to implement a new development model. At the same time, the occasion put to rest rumours that a number of BJP and Congress leaders would join the party on the occasion.
Col Kothiyal, who was involved in the Kedarnath Reconstruction Work and Youth Foundation initiatives, claimed there was no shortage of talent in the state. There was need for inspirational leadership in the Uttarakhand. He claimed that, if AAP formed the government in the state, the focus would be on providing electricity, water, roads, health, education services in the hills. He promised to carry out the responsibility given to him.
The road show caused traffic jams in various parts of the city.