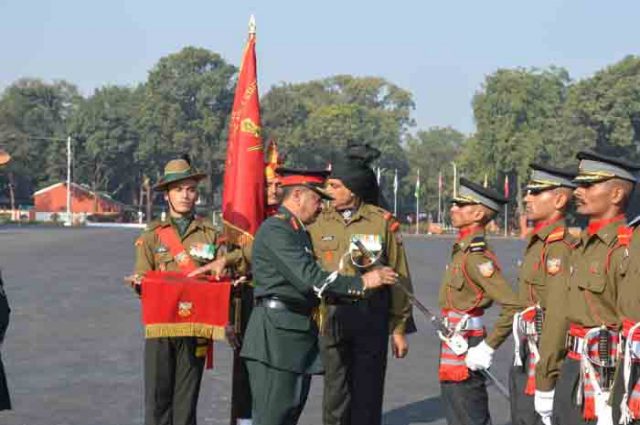 DEHRADUN, 6 Dec: The historic Chetwode Drill Square played host to the Commandant’s Parade for Autumn Term 2018, here, today. The Commandant’s Parade marked the culmination of training of 347 Indian and 80 Gentlemen Cadets from seven friendly foreign countries. A large number of school children from Dehradun and neighbouring cities, local citizens and Army personnel with their families and friends witnessed the impressive parade.

Lt Gen SK Jha, Commandant, Indian Military Academy, who reviewed the Parade, complimented all the Gentlemen Cadets for an immaculate turnout and excellent drill movements, which indicated a high level of motivation, pride and cohesion achieved by them during their training at IMA. He also congratulated everyone for being on the verge of completing the training successfully.

General S K Jha, in his address to the Gentlemen Cadets, highlighted that the Army’s reputation rests firmly on their shoulders. He said that they had earned this honour through hard work and needed to retain it by living up to the Army’s core values of Character, Competence, Commitment and Compassion. These values are reflected in the IMA’s Code of Conduct and Gentlemen Cadets, aspiring to high ideals and pursuing excellence, must demonstrate these at all times.

The General Officer also extended his compliments to the 80 Gentleman Cadets from friendly foreign countries for having endured through the rigorous regimen of the training, exhibiting excellent transformation and becoming ready to don the ranks in their respective armies as officers. He said the strong bond of togetherness that they have developed in IMA shall foster into a concerted effort towards countering the umpteen global challenges the world faces today.