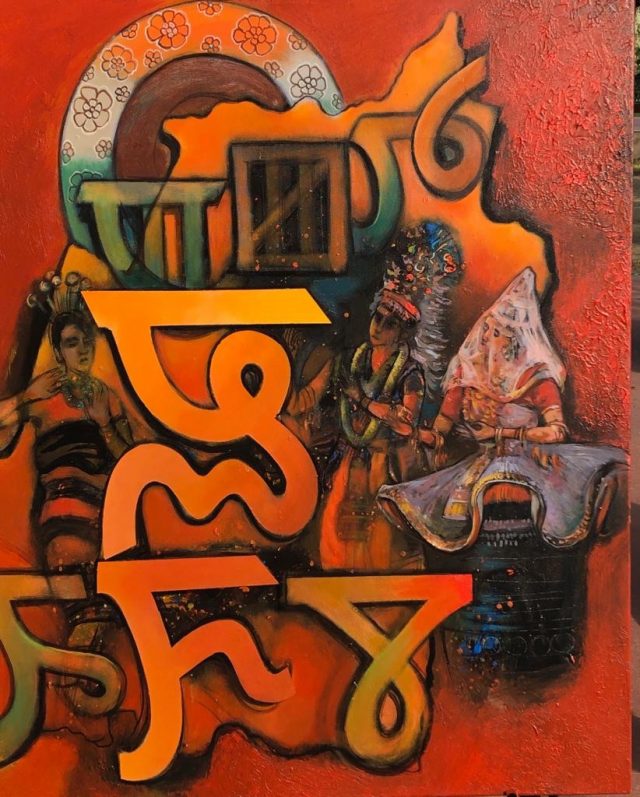 ‘Another Litt Fest? Tell me what’s new?’ ‘For the fifth time under four Directors,’ boomed the present LBSNAA Director, Mr Sanjeev Chopra, ‘You could safely say our Litt Fest is here to stay.’ At the Plaza in Happy Valley, I am surrounded by artists, writers, poets and administrators, gathered from across the country to meet and mingle; exchange views and toss ideas. Take Pavan Verma, distinguished diplomat-author, who’s here to talk about his book on Adi Shankaracharya; as are twenty painters showcasing the alphabets of our various regional languages in colour. No place could be better than our nineteen square miles of Mussoorie to host this event – our hills have always been kind to writers. And that is from the day dot. This has been home to the highest number of published authors anywhere in the the world. I am near the home of Kedar Pandey a.k.a. Rahul Sanskritayan, who spent eight years to give us fifty-six books and become the first of Mussoorie’s three Padma Bhushan Awardees. Mussoorie was barely thirteen, in 1838, when along came Fanny Parks, who impishly send a plain’s flat-footer to gather stinging nettles. ‘It has stung me; it is a scorpion plant!’ Back he came, screaming. But nothing stung the Australian John Lang as he left us exaggerated accounts of his times. Please be warned: ‘Landour has a very high-density of authors!’ In a thousand acres’ live authors with over two hundred published titles in print. There’s Stephen Alter with two-dozen titles to his credit; at Oakless, is William Mackay Aitken (or Bill Sa’ab, as he’s fondly called) writing fast and furiously while in Ockbrook, live travel-writers Hugh and Colleen Gantzer. Of course (in case you haven’t noticed) I have prudently left myself out. I believe that I’m just an old typewriter. What I call writing is still to come. So what’s new? Gentle Reader, bear with me, for it’s hard to tell how-many-more writers are lurking around. Small wonder then, many new entrants choose the short cut of vanity publishing. Its simple find a printer in Noida, Okhla or Daryaganj. Result? Your book’s slapped together tatkal – in half the time. If you cannot find someone to release your work, you’ve been looking in the wrong place. Search for an out-of-work politician. Follow this up with a visit to the nearest dhabawala to slap together the ‘chips n chai’. Anything more elaborate, could be hazardous to your wallet. Then come the slog overs – getting rid of the book cartons cluttering your living room. ‘No one buys them,’ complains the local bookseller. ‘They only crowd my shelf-space!’ When I see some of our wannabe authors trying to flog their creation, I am reminded of Maryville’s Cecil Foster, who though claiming descent from Bonnie Prince Charles, Scotland’s tragic king, had, nonetheless arrived on hard times. ‘Would you like to help an old man?’ He would accost you at the bus-stand, peddling wild onions as daffodil bulbs! As you sorted out the difference, he would slip off to the nearest booze shop. His grin was not too unlike the look on the face of the out-of-work actor I met at the Mussoorie Writers’ Festival. ‘How’s the book coming along?’ I asked, making conversation. His eyes to glaze over, saying: ‘Got the title – Famous People Who Have Met Me.’ And that’s as far as he got. When last heard of, his publishers were in hot pursuit to get a refund of the advance given ten years ago. There you are, now with letting out so many hillside secrets, I am chary of trouble. Some of them are not exactly the kind of people you would like to meet in a dark alley. Coming home the other day, on a dark moonless night, I saw this grumpy carrying his sack full of unsold books. I took off, at least as fast as my legs would carry me, consoling myself with: ‘Better safe than sorry!’ After all who knows? With the way things were going, the chances of getting clobbered over the head with a sack full of the latest non-saleable bestsellers can be pretty high.