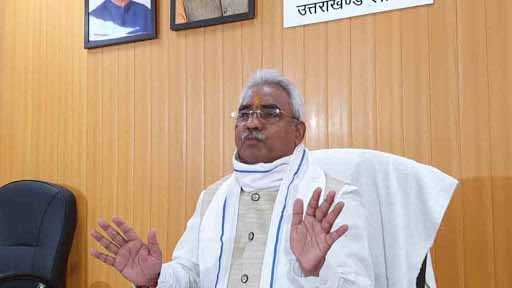 By Arun Pratap Singh
Dehradun, 24 May: The Congress party and the BJP today held protests against each other, praying for wisdom to descend on the other.
The BJP State President, Madan Kaushik, observed a silent protest against the Congress leaders for indulging in “negative politics” and wished them wisdom in the testing time of Corona pandemic, today. On other hand, Congress leaders led by Pradesh Congress Committee President Pritam Singh hosted a “symbolic fast” wishing wisdom dawns on the BJP led Government in Uttarakhand.
While the Congress leaders questioned the “inadequate health system”, which according to them failed to cope with the pandemic and save lives in the state, the BJP leaders claimed that Congress leaders were indulging in negative politics and they ought to learn from BJP workers who were working hard to help people in the current wave of Corona, instead of indulging in politics.
Madan Kaushik spent about an hour in the state office. On this occasion, along with Cabinet Minister Bansidhar Bhagat, state general secretary of the party and MLA Khajan Das, other party officials also participated in the silent protest. Speaking later to media persons, Kaushik alleged that the Congress leaders were merely doing politics instead of helping people in the state and, for this reason, the BJP had observed a silent protest wishing Congress leaders have the wisdom to learn from the BJP workers, who were busy helping people with all their capacity. Kaushik today also directed the party activists to organise blood donation camps and ensure collection of at least 2,000 units of blood.
On the other hand, the Congress members, under the leadership of State President Pritam Singh and former Chief Minister Harish Rawat, also hosted a symbolic fast at the PCC Office at Rajeev Bhawan so that the government would do something to improve the health services of the state.
Pritam Singh said that black fungus had been declared an epidemic by the state government but no action plan had been devised to deal with it. Black fungus cases were constantly increasing in the state, but there was no system in place to prevent and deal with the epidemic. Patients were facing crisis of essential medicines and injections for the treatment of the black fungus. Even the vaccination campaign had been derailed. People were made to wait for hours and still return without vaccination from the vaccination centres because of non availability of the vaccines. The Central as well as the state governments were not bothered about dealing with this crisis. Former Chief Minister Harish Rawat also lashed out at the state’s ‘poor’ health services and said that people even in the cities were not able to get treatment properly so one could easily imagine the plight of the people living in villages. He demanded that immediate steps be taken to ensure supplies of essential medicines to treat black fungus and prevent its spread in the state.