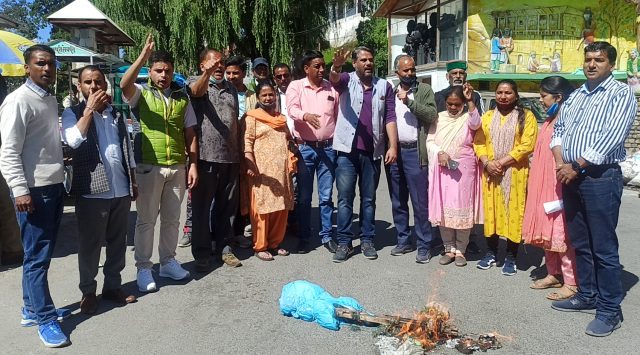 By Our Staff Reporter
Mussoorie, 12 Oct: Congress workers, under the leadership of city Congress President Gaurav Agarwal, gathered at Jhula Ghar Chowk here, today, and set ablaze an effigy of the BJP government. They raised slogans against the BJP’s central and Uttar Pradesh governments, also. They demanded the resignation of the Union Minister of State for Home, whose son was involved in the Lakhimpur Kheri incident. They celebrated the return of Yashpal Arya and Sanjeev Arya to the Congress with the distribution of sweets.
Gaurav Aggarwal said that the farmers of the country have been agitating continuously against the three ‘black laws’ passed by the central government for the last one year, but instead of taking these back the BJP government was working to literally crush the farmers. He said the perpetrators were sitting in high positions. The opposition wanted that the culprits of Lakhimpur Kheri be punished and a fair investigation undertaken, till which time the Union Minister of State, Ajay Mishra, should be removed from office.
Aggarwal expressed the hope that more leaders would return to the Congress from the BJP.
Present on this occasion were Pratap Panwar, Kuldeep Rauchela, Nandlal Sonkar, Rajiv Agarwal, Shahrukh Khan, Saurabh Sonkar, NSUI city president Jagpal Gusain, Rami Devi, Bharosi Rawat, Sonia Singh, Shivani Bharti, Mukesh Rao, Kedar Singh Chauhan, Anand Pawar and many others.