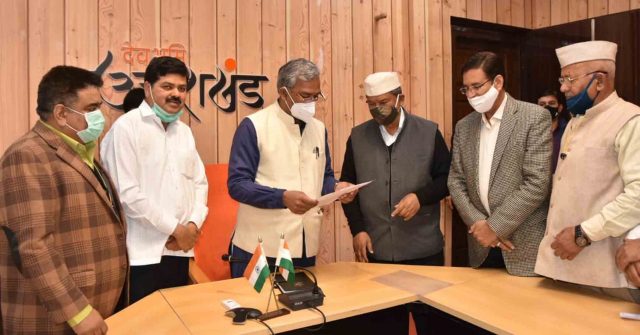 By Our Staff Reporter
Dehradun, 12 Feb: A delegation of the State Congress, led by former CM Harish Rawat and State President Pritam Singh, met Chief Minister Trivendra Singh Rawat, here, today. They discussed relief and rescue operations ongoing in Joshimath’s Reni area.
The CM informed them that rescue and relief was underway at the fastest pace possible. It was taking time to clear the NTPC tunnel because of the excessive silt. Separate responsibilities have been given to the various forces involved to speed up the process. The Centre was also extending all possible cooperation in the task. Rescue workers were conducting operations in difficult circumstances. The Union Home Ministry is regularly reviewing the rescue work.
Praising the work being done, Harish Rawat appreciated the speed with which rescue workers were deployed. This had helped bring the situation in control. He accepted that relief had also been provided in time for those in affected villages, even as the Chief Minister had visited the disaster site to understand the gravity of the situation. He praised the SDRF, NDRF, Army, ITBP, the local administration and government for the work done thus far. He expressed the hope that adequate relief would reach all those in need.
A six point memorandum was also submitted to the CM on the occasion. It was suggested that the affected villagers be rehabilitated elsewhere. It was important to examine the causes of the disaster to avoid repetition in the future. A safety audit of all the projects was also suggested.