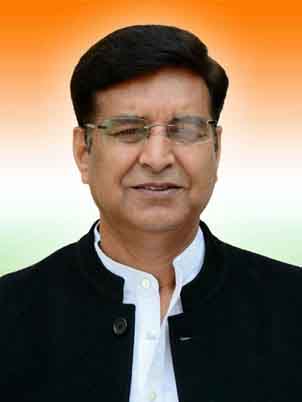 By Our Staff Reporter
Dehradun, 19 Jan: A delegation of Congressmen led by State Congress President Pritam Singh called on the Director General of Police, Ashok Kumar, in his office, today, and demanded withdrawal of “false cases” in the Lalkuan incident case registered by the police and demanded action against “guilty” police officials in this regard.
The Congress delegation claimed that “false cases” had been registered by the Police in Lalkuan against its leaders, including former Minister Harish Durgapal and District General Secretary of the Congress Bhagwan Dhami, Youth Congress leader Kamal Danu as well as Youth Congress activist Raja Dhami. A memorandum was also submitted by the Congress leaders to the DGP in this respect.
Later, speaking to media persons, Congress State General Secretary Vijay Saraswat disclosed that, in the memorandum submitted to the Director General of Police, the State Congress President Pritam Singh had raised concern over the fact that the Police had registered ‘false cases’ against the Congress leaders for raising their voices against the local liquor mafia. Saraswat further stated that the Pradesh Congress Committee had strongly condemned the Police action in this regard. Pritam Singh said that, on 10 January, in Bindukhatta, a liquor smuggler filed a false case against the Congress District General Secretary, Bhagwan Dhami, Youth Congress leader Kamal Danu and Youth Congress worker Raja Dhami, alleging violence against him. They alleged that the local police was also hand in glove with the liquor mafia. It was stressed that Harish Durgapal, a senior leader of the Congress party and a former minister and public representative, had gone to Lalkuan Police Station on 11 January to inquire about the matter. When he decided to protest against the liquor mafia and oppose his nexus with the police, cases were registered against him and other Congress leaders under serious provisions of IPC.
Pritam Singh said that the action of the Lalkuan Police in Nainital district appeared to be an attempt to harass the leaders of the opposition party at the behest of the ruling party and the liquor mafia by registering false cases for political vendetta. According to the Congress party, the DGP had assured Singh of appropriate action in this regard.
Among those who were present on the occasion were Additional State General Secretary Naveen Joshi, former MLA Rajkumar, District President Sanjay Kishore, Mahanagar Congress President Lalchand Sharma, Harimohan Negi, Girish Puneda and Garima Dasauni.