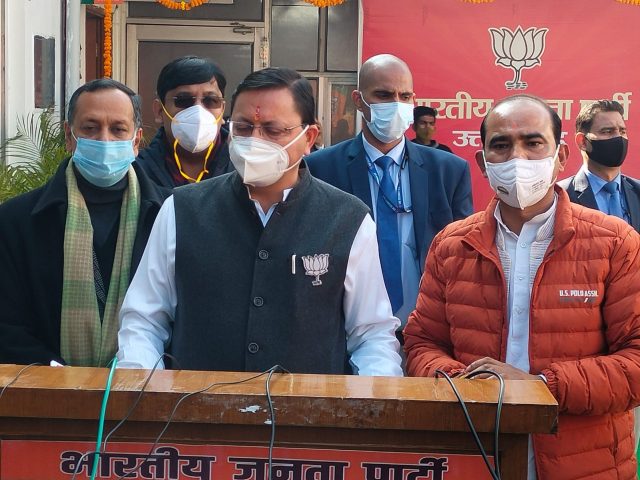 DEHRADUN, 15 Jan: Chief Minister Pushkar Singh Dhami spoke to a select group of journalists today. During this informal interaction, he claimed that the Congress in Uttarakhand was left without any real issues and was resorting to baseless allegations against the government. He claimed that BJP in past five years had given a transparent and corruption free government in the state. On the other hand, the previous Congress Government in Uttarakhand led by the then CM Harish Rawat was steeped in corruption, and there were many scams including the NH Scam, liquor scam, mining scam, etc. He claimed that Congress leaders had no moral authority of levelling baseless allegations of corruption against the BJP Government. He also indicated that he would be contesting assembly polls from his traditional constituency Khatima, as it was in Khatima that he had grown up and there was no option of leaving the constituency where people loved him so much. He rejected any claims of contesting from Dehradun as had been speculated on the social media in past few days. The CM claimed that during the tenure of the BJP government, work worth one and a half lakh crores rupees had been approved. With the cooperation of Prime Minister Modi, work was underway in respect of every department including rail, road. Under the Ayushman scheme work was accomplished. He added that the Modi government had made arrangements to provide treatment up to five lakh to the poor. Dhami said that now the appeasement policy of Congress would not work anymore as the people were more concerned about development and nationalism and these were the core issues that the BJP would approach the people with in the coming elections. He also claimed that the youth would be given more tickets this time. Admitting that there were a large number of contenders in each constituency, he said that the BJP Parliamentary Board would decide the tickets solely on merit and winnability factor. Responding to a question, the Chief Minister said that the government had taken a decision in respect of transfers and other issues before the model code of conduct was imposed. No decision was taken after the code of conduct was imposed. He added that the government had already forwarded the relevant documents in this matter to the Election Commission. Dhami also claimed that employment and self employment opportunities were being provided to the youth. Recruitment process had been started for 24 thousand posts. There were no appointments in the police for a long time but now the recruitment process was already underway on 1734 posts in the Police department. The government had also introduced a new sports policy. During the pandemic, a package of Rs 119 crores was given to those affected due to the pandemic. The issue of assets pending for 21 years with Uttar Pradesh had been resolved. Dhami also claimed that there was no antiincumbency against the BJP Government in Uttarakhand and added that over 500 decisions had been taken during his 6 months’ tenure as CM. The people were aware of the importance of a double engine government in the state and would vote for the continuance of the BJP Government.

Garhwal Post has established itself as a credible, balanced and forward looking newspaper in India. Based in Uttarakhand, the daily is read by the aware, socially and culturally responsible, high-income elite of society.
Contact us: info@garhwalpost.in
calgary dating https://garhwalpost.in/local-single-milfs/