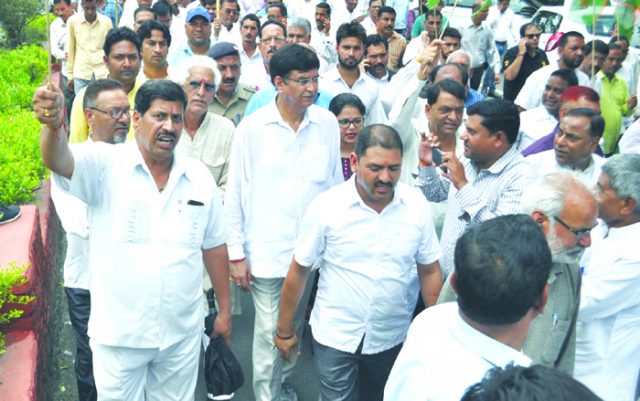 DEHRADUN, 15 Jul: Congress activists held a dharna and demonstration at the Gandhi Park here, today, under the leadership of State President Pritam Singh to protest against ‘rising prices, the Rafale scam, impractical Panchayati Raj amendment, constitution of the District Development Authorities, raising of the ban on land purchase in Gairsain’ and a plethora of other issues. A memorandum was also submitted in this regard to the Governor. Present on the occasion were former CM Harish Rawat, Leader of the Opposition Dr Indira Hridayesh, former State President Kishore Upadhyay, MLAs Mamta Rakesh, Furqan Ahmed, Adesh Singh Chauhan, former MP Mahendra Singh Pal, former Ministers Dinesh Agarwal, Mantri Prasad Naithani, Matbar Singh Kandari, Shurveer Singh Sajwan, and a large number of party officials and members. The proposed day long dharna did not last very long, however, and most of those present had left by around 2 p.m. This exodus was precipitated by a controversy over Harish Rawat not being allowed to address the gathering early because he had to go elsewhere. He left without having spoken, which indicated the ongoing factionalism within the state unit.