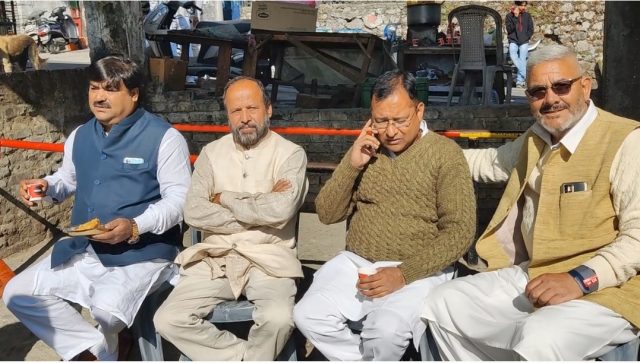 By Our Staff Reporter
Mussoorie, 17 Nov: Preparations for the upcoming 2022 elections have been intensified by the Congress party. Observers have been appointed by Uttarakhand in-charge Devendra Yadav for all 70 assembly constituencies, who are polling party workers on the future course of action. A strategy is also being chalked out to end factionalism so that the Congress can perform better in the upcoming elections.
In Mussoorie, the observer informed workers about the party’s activities. Suggestions were also sought from senior leaders on how to strengthen the party. Detailed information is also being a gathered about those seeking party tickets, so that a detailed report can be submitted to the state in-charge.
It is believed that by the end of December, the Congress party will announce its candidates for all 70 constituencies so that campaigning can begin.
Congress leaders Manmohan Singh Mall, Jot Singh Gunsola, Upendra Thapli and Gaurav Aggarwal said that there is no factionalism in the Congress party. There may be differences among the workers, but there is no difference of opinion on what is necessary for the party. The Congress workers would work for the party candidate. Congress Mussoorie President Gaurav Agarwal, former MLA Jot Singh Gunsola, former Municipal President Manmohan Singh Mall, former President Satish Dhoundiyal, Bhagwan Singh Dhanai, Megh Singh Kandari, Arvind Sonkar, Jasbir Kaur, Shyam Bora, Pratap Panwar, Shivani Bharti, Jagpal Gusain, Shahrukh Khan, Bhagwati Prasad Kukreti, Ramprasad Kavi, Virendra Panwar, etc., were present.