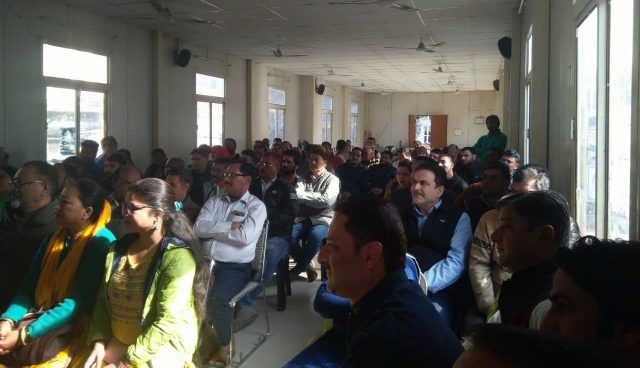 Dehradun, 11 Dec: The City Congress Committee, under the chairmanship of Lalchand Sharma, discussed preparations for the ‘Bharat Bachao Rally’ to be held on 14 December in New Delhi at the behest of interim Party President Sonia Gandhi. The meeting was held at the Rajiv Bhavan, here.
Decisions were taken on who would participate from Dehradun and how this would be organised.
According to City Spokesperson Dr Pratima Singh, a large number of Congress activists would attend the rally. Lalchand Sharma asserted that the entire nation was suffering under the rule of PM Modi, leading to a chaotic situation. Women were feeling insecure, while the economy was in a shambles. Unemployment was on the increase. Farmers were in dire straits. The rally would be held at the Ramleela Ground in Delhi and its purpose would be to bring down the BJP government. He revealed that the Uttarakhand Congress would be represented in the thousands under the leadership of State President Pritam Singh.
Among those present at the meeting were former MLA Rajkumar, former Zila Panchayat President Chaman Singh, Navin Joshi, Godavari Thapli, Prabhulal Bahuguna, Dr Pradeep Joshi, Tahir Ali, Anand Bahuguna, Deep Vohra, Neenu Sehgal, Dr Pratima Singh and many others.