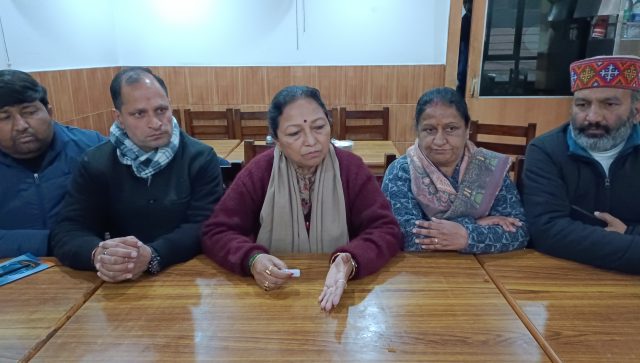 By Our Staff Reporter
Mussoorie, 30 Dec: Congress State General Secretary Godavari Thapli held a meeting with members of the Municipality and Cantonment Council here, today, and sought support for the Congress in the coming election.
While talking to reporters, Thapli said that the BJP Government in the state has completely failed and the people were fed up with it. Inflation, corruption and unemployment were at their peak. Nothing had been done regarding rising unemployment, migration, inflation and corruption in the state.
She also alleged that people had been misled by the Mussoorie MLA and Cabinet Minister Ganesh Joshi. Joshi had promised to place his report card of 10 years before the public many times, but till now it had not been forthcoming.
She lamented that there is only the MPG College in Mussoorie, which had a huge shortage of teachers and employment oriented subjects. St Mary’s Hospital was in poor condition.
She also alleged that Cabinet Minister Joshi was distributing the MLA-LAD fund among his cohorts and no tenders had been floated for any work. Nothing was resulting from this. Recently, all fronts of the Mussoorie BJP had expressed their displeasure by writing a letter to Ganesh Joshi. He would certainly lose the coming election from Mussoorie constituency. She declared that a full majority Congress government would return in the state.
Present on the occasion were Megh Singh Kandari, Mahesh Chandra, Naginder Uniyal, Amit Gupta, Bharosi Rawat, Sushil Agarwal, Pratap Panwar, Darshan Singh Rawat and many others.