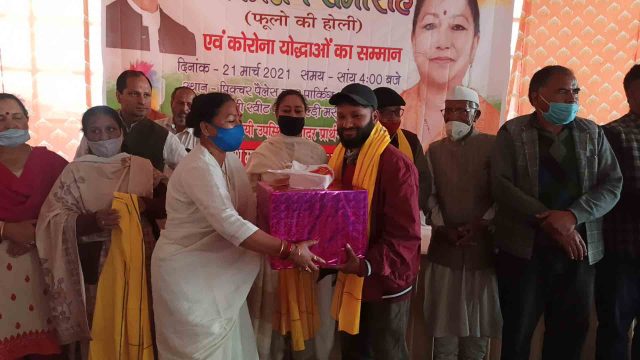 By Our Staff Reporter
Mussoorie, 21 Mar: A Holi Milan programme was organised by the Congress Party’s State General Secretary Godavari Thapli and Congress leader Upendra Thapli in the auditorium of the Picture Palace, here, today.
Corona warriors were also felicitated on the occasion. General Secretary Godavari said that journalists, sanitation workers, health workers, police personnel played an important role in the front line during the Corona period, but the government has not given a frontline category to journalists, which was unfortunate. All journalists should immediately be Corona vaccinated. She said that journalists are the fourth pillar of democracy and had played a crucial role during the pandemic.
Godavari Thapli attacked the present BJP government, saying that only the face of the Chief Minister had been changed in Uttarakhand, the functioning was the same as before. The current Chief Minister knows that nothing has been done by his predecessor for the people of the state. As such, 2022 would belong to the Congress. The Congress will win the election and form a government with an absolute majority.
Cabinet Minister and Mussoorie BJP MLA Ganesh Joshi was criticised as many areas of Mussoorie, even today, lacked basic facilities. Former Congress MLA Jot Singh Gunsola said that there is a Congress wave in the state and the manner in which the public are participating in the protest rallies made it clear that there is anger against the BJP government. He said that everyone is united in the Congress and, in 2022; the Congress would form the government.
Present on this occasion were Mussoorie Congress President Gaurav Aggarwal, former Municipal President Manmohan Singh Mall, Women Congress President Jasbir Kaur, Sushil Aggarwal, Pratap Panwar, Darshan Rawat, Manisha Kharola, Geeta Kumai, Sushil Aggarwal, Aarti Aggarwal, Mahesh Chandra, Amit Gupta, Megh Singh Kandari, Jaiprakash Uttarakhandi, Mussoorie Students’ Union President Prince Panwar, Satish Dhodiyal, Kedar Singh Chauhan, Rajat Aggarwal, Seemul Chand, Arvind Sonkar, Rajiv Aggarwal and others.