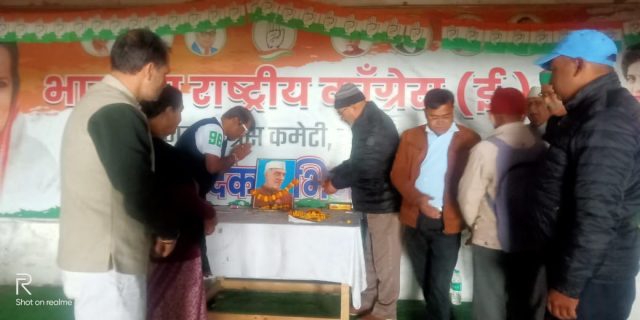 Mussoorie, 14 Nov: On the birth anniversary of the country’s first Prime Minister, Jawaharlal Nehru, Congress workers remembered him by paying tribute before his portrait at a programme organised in the Congress Bhawan, here, today.

On this occasion, the speakers threw light on his life and took a pledge that to follow in his footsteps. Former Municipal President of Mussoorie Manmohan Singh Mall and City Congress President Gaurav Aggarwal said that Nehru had a special attachment for Mussoorie and whenever he got some time off, he would visit the town. He used to stay at the Savoy, where even today there is a gallery decorated with his paintings.

Congress leader Amit Gupta said that Nehru was a successful administrator, great thinker and litterateur. Rajeev Aggarwal said Pandit Nehru was the father of modern India. He laid the foundation of a democratic, secular, pluralistic and strong India. Megh Singh Kandari said that Nehru had a deep understanding of the people of the country. It was his habit of gentleness, simplicity and giving respect to his opponents that made him great. He also worked hard to establish economic well-being. The country would never forget his contribution.