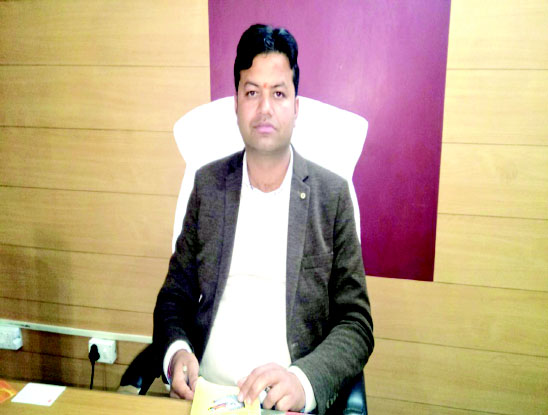 By OUR STAFF REPORTER
Mussoorie, 18 Jan: Mussoorie Municipal Chairman Anuj Gupta has denied the allegations made by Board Member Geeta Kumai on corruption by Pratap Panwar, Chairperson, Tax Assessment Committee. Anuj Gupta said that an inquiry had found that no meeting had been held of the committee when its members were not present. He said that, as there were about 100 pending files whose tax assessment was to be done, people were facing lots of problem. This was why the tax assessment committee was formed under the leadership of Member Pratap Panwar with members Darshan Rawat, Geeta Kumai, Kuldeep Rauchella and Suresh Thapliyal.
He said the time given to the committee was 45 days and, after that, the committee would automatically be dissolved. Gupta said if there was evidence backing the allegations, then it should be produced before him so that action could be taken according to the law. He added that a new tax assessment policy would be formulated to bring transparency in tax assessment. Arrangements would also be made for online payment so that any kind of corruption could be averted.
Pratap Panwar, Chairperson of the committee, said that Member Geeta Kumai was raising baseless allegations against him. He said that owing to lack of quorum of the committee, he had adjourned the meeting. How could corruption have taken place when not even a single file was approved? He further said that, if the Geeta Kumai proved her allegations, he would resign from the post of Chairman of the Committee. Present on the occasion were member Darshan Singh Rawat, Suresh Thapliyal and Nandlal Sonkar.

Garhwal Post has established itself as a credible, balanced and forward looking newspaper in India. Based in Uttarakhand, the daily is read by the aware, socially and culturally responsible, high-income elite of society.
Contact us: info@garhwalpost.in
dating round rock