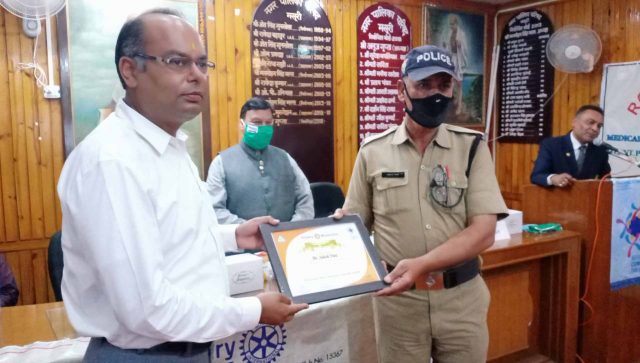 MUSSOORIE, 29 Jun: Corona Warriors engaged in protecting people from the dreaded Corona crisis were felicitated at the auditorium of the Mussoorie Municipality.
Municipal President Anuj Gupta was the Chief Guest on the occasion. The 23 Corona Warriors included those from the Police, Drinking Water, Power, Administration, Health Departments and Sanitation employees. They were awarded certificates and Mementos.
Social activist Rajat Aggarwal saluted the Corona Warriors, saying they played an important role, working in the front line during the Corona era. He said that the battle against Corona could not be fought under any circumstances without participation of the people. Nitish Mohan Aggarwal, President of Rotary Club Mussoorie, said that every member of the club was feeling honoured by giving respect to the Corona Warriors. On this occasion, he also praised Varun Chaudhary, former SDM, Mussoorie, for playing an important role, by making people wear masks and adopt social distancing. Former Mussoorie Police In-charge Vidya Bhushan Negi was also praised by him.
SI Suraj Kandari said the police department worked at the guidance of the senior officers and they had good and different experiences working against the corona infection. Present on this occasion were Sanjay Aggarwal, Alok Malhotra, Rotary Club Secretary Manoranjan Tripathi, former Divisional Headmaster Ranveer Singh, Director Kuldeep Mathur, Neeraj Gupta, Shailendra Karnwal, Manmohan Karnwal and others.