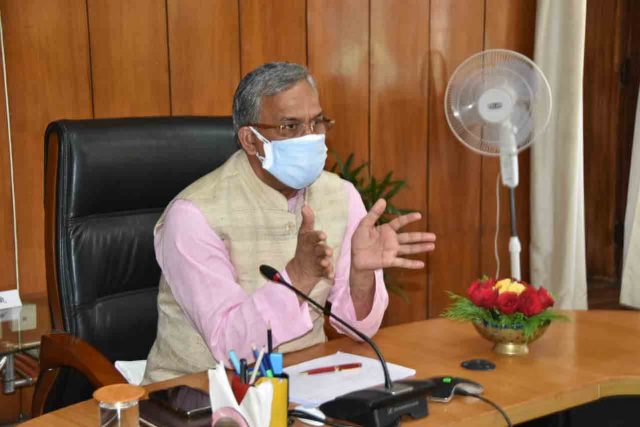 By Arun Pratap Singh
Dehradun, 30 Oct: The Uttarakhand BJP was today in very aggressive mode holding media interactions at several levels and places and indulging in counter aggression against the chief opposition party, the Congress, for demanding the resignation of Chief Minister Trivendra Singh Rawat!
It may be recalled that the Uttarakhand High Court’s order to register an FIR and hold a CBI inquiry into allegations against the Chief Minister had been stayed by the Supreme Court on Thursday and, not only this, it had in fact expressed dismay at the High Court decision. Following the High Court’s order for a CBI inquiry into allegations against the CM, the Congress had demanded the CM’s resignation and had gone to the extent of demanding dismissal of the BJP Government. Now that the CM has managed to secure relief against the HC’s order from the Supreme Court, the BJP has decided to counter attack the Congress narrative.
It was the turn of CM Trivendra Singh Rawat here, today, to aggressively counter the Congress narrative and hit back at the opposition party for spreading ‘misinformation’ against the government; while in Haridwar, BJP State President Bansidhar Bhagat, too, interacted with the media to criticise the Congress for demanding the CM’s resignation “without any basis”. In Dehradun, the BJP Mahanagar Unit also held a press conference which was addressed by Rajpur Road MLA Khajan Das in this regard, while the BJP’s chief spokesperson and MLA Munna Singh Chauhan, too, was quite harsh on the Congress, targeting the main opposition party on the same issue.
Chief Minister Trivendra Singh Rawat asserted that those who were questioning his commitment to zero tolerance towards corruption had much to explain now. He claimed that there were all kinds of conspiracies during the past three and half years against his government and efforts to destabilise it. He alleged that some politicians as well as the corrupt mafia had joined hands to try and malign his government. He had promised zero tolerance for corruption on the day he took office. He did exactly the same over the last three and a half years and would continue to do so even after the completion of his five-year term. He said that zero tolerance towards corruption was one of the major objectives of the BJP Government in the state and no one could distract it from this focus.
Rawat went a step further and questioned the motive of senior Congress leader and former CM Harish Rawat. He did not fail to put the present Congress General Secretary, Harish Rawat, in the box. He reminded that one particular person had conducted a sting operation on the then CM. He and other Congress leaders had then termed this person a blackmailer. Now, Harish Rawat and other Congress leaders were attempting to not only defend this person, but turning him into some sort of a crusader, while making baseless allegations against the present CM. He challenged Harish Rawat to come out with the details on the sting operation against him or else the people would expose him!
Chief Minister Trivendra said that, during the Covid period, efforts were made to effectively control the pandemic. The pandemic situation now appeared to be under control while the movement of people for work had accelerated. He said it had been observed that 25 percent of the Covid related deaths had occurred within 24 to 48 hours of the patients reporting to the hospitals concerned, since they probably were initially taking self medication till their condition worsened.
BJP State President Bansidhar Bhagat, on the other hand, addressed the media in Haridwar and said that the Congress conspiracy to malign the CM and the BJP Government regarding the FIR had fallen flat in the wake of the Supreme Court’s stay granted against the CBI inquiry order of the High Court. Rajpur Road MLA Khajan Das and chief spokesman and Vikasnagar MLA Munna Singh Chauhan, too, addressed the media in this respect, attacking the Congress party and its leader for trying to malign the image of the government and the CM.