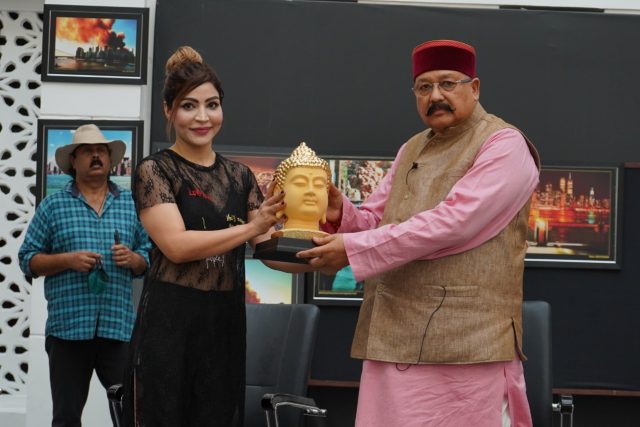 By Our Staff Reporter
Dehradun, 14 Sep: Senior Cabinet Minister Satpal Maharaj, who holds the charge of Tourism and PWD, observed today that 9/11 was a history changing moment for the entire world and that it was very courageous of photographer Kamal Sharma to shoot live photographs of the Twin Tower terror attack.
Maharaj was speaking at the Garhwal Post-Graphic Era photo exhibition on 9/11 pictures clicked by internationally renowned photographer Kamal Sharma currently on at Graphic Era Hill University, Dehradun. 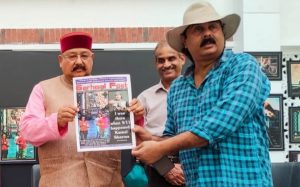 Maharaj was the Chief Guest today at the exhibition, which has been underway since 10 September and will close on 17 September.
Maharaj said that, on the fateful day of 9/11, he happened to be in Dubai when the news broke. Initially the news being broadcast on TV indicated that it was an accidental plane crash. He saw people gathered in the market around TV sets and, on inquiry, it became clear that it was a terror attack. He said that this terror attack was a huge shock for the entire world as it was then assumed that US was safe from terror attacks of this magnitude. However, this incident proved that none could be safe from the tentacles of terror in the world and even the most powerful nation like the US could become a victim of a large scale terror attack that took thousands of lives. Maharaj appreciated the fact that Sharma dared to capture the moments of terror in an era when the photography was not digital.
Special Correspondent of Garhwal Post, Arun Pratap Singh stated that terror was not an isolated danger but could affect the entire world. He said that, when a powerful country that is surrounded by oceans from almost all directions could become a victim of such international terror, India was much more vulnerable as it was surrounded by hostile neighbours actively engaged in cross border terrorism in India from across the border directly and by proxy. Terror had become a tool of proxy war in the modern era and, therefore, India ought to remain always on high alert. He noted that there were huge lessons to be learnt for the whole world from the 9/11 terror attacks.
He also briefed the gathering that Garhwal Post had brought out a special edition on 11 September on the twentieth anniversary of the attack.
Senior Official of Graphic Era Management, Rakhee Ghanshala, and Arun Pratap Singh welcomed the minister on his arrival. He was shown around the picture gallery by the photographer, Kamal Sharma.
Rakhee Ghanshala along with Prof (Dr) Rakesh Kumar Sharma also presented a memento and an Uttarakhandi cap to the Cabinet Minister, prepared by the Fashion Department of the university.
Prof (Dr) Subhash Gupta, Director Infrastructure, Graphic Era highlighted the achievements of the University and said that Graphic Era Deemed University has made its place among the top 100 universities of the country for the second time.
Among those present on the occasion were Vice Chancellor of Graphic Era Deemed to be University, Prof Rakesh Sharma, Pro VC of Graphic Era Hill University Prof Jyoti Chhabra, Registrar, Graphic Era Hill University, Capt Himanshu Dhulia, and senior journalists Dr Subhash Gupta and Dr Anjali Nauriyal.