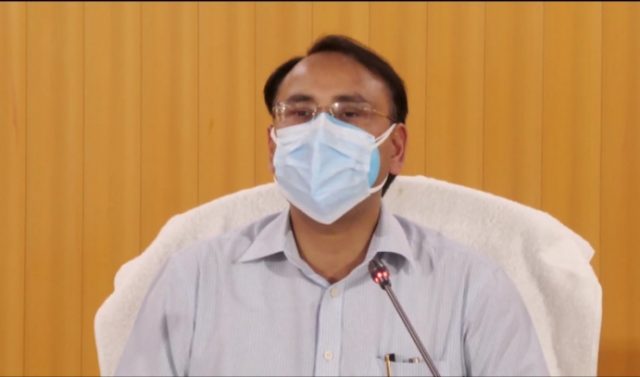 Dehradun, 19 May: Secretary, Health, Amit Negi today said that more than 7000 Covid patients had recovered in the last 24 hours, while about 4800 new Covid cases had been detected, which meant that the recovery rate was now clearly higher than the infection rate in Uttarakhand.
Negi was briefing the media on the Corona situation in the state. The Health Secretary said that 1200 people had consulted the e-Sanjeevani portal, yesterday. So far, more than 26 thousand people had benefitted from the e-Sanjivani medical consultancy portal in the last few days, he disclosed.
He added that the Covid-19 positive rate had come down from 23 to 15 percent in the state. He claimed that sampling was being increased continuously. Sampling of 35 thousand was done in the state yesterday. At present, the state’s Covid testing rate was double the national average. He also stated that since 1 April, according to the positivity rate figures of women and men, 62 percent of the infected were male, while 38 percent were female. Apart from this, corona infection had been detected among the youth also. In the second wave, 21.9 percent of the infected people were in the age group of 20 to 29 years, 24.2 percent in the age group of 30 to 39 years, and 18.5 percent in the age group of 40 to 49 years. Apart from this, after 1 April, 2021, the average death rate among people in the age group of 40 to 79 was the highest. In Corona deaths, 17 percent of people aged between 40 and 49 years died, 23 percent of people aged 50 to 59 died, 24 percent of people aged 60 to 69, while 16.42 percent of the deaths occurred between 70 and 79 years of age.
Giving information on the supply of oxygen, the Nodal Officer, Ranjit Sinha, informed media that the supply of 96 metric tonnes of oxygen from 3 big plants had been allocated by the Government of India. Apart from this, there was about 70 metric tonnes of production from 6 small units within the state itself. Filling points had been allocated to all the 13 districts of the state for supply of oxygen at different places through which 167 metric tonnes of oxygen was being produced and supplied daily across the state. Apart from this, the Government of India had allocated 60 metric tons from other states. So far, 260 metric tons of oxygen had been received from other states.
Sinha added that more than 50 metric tonnes of oxygen had been kept in reserve in Garhwal division while 40 metric tonnes of oxygen had been kept in reserve quota in Kumaon division so that there is no crisis at peak time. Apart from this, small oxygen plants had been installed inside 11 hospitals. Work on oxygen plants is going on at 11 new places, while another 11 have been approved. The proposal for oxygen plants at 15 new locations is ready. Apart from this, new oxygen tanks are also being planned to increase storage in large hospitals. Sinha revealed that, in the hill districts, 72 hours of oxygen had been kept in the reserve quota while, in the plains, 24 hours of oxygen had been kept in reserve.