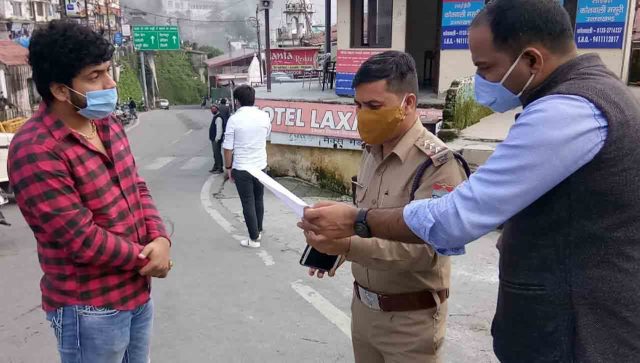 By OUR STAFF REPORTER
MUSSOORIE, 8 Sep: The administration and the police, under the leadership of SDM Manish Kumar carried out a checking campaign in which the people found without masks and violating social distancing were penalised, here, today. The people were also made aware about safety measures.
Hotels and tourists coming to Mussoorie from other states were also checked. Bookings in hotels were also examined. SDM Kumar said that it had been seen for some time that the rules of Unlock-4 were not being followed. A rigorous checking campaign was carried out and transgressors penalised.
He said it was necessary to bring ICMR-certified No Covid Certificate when coming from out of state. Complaints had been received that many people were bringing fake certificates. Action would be taken against such people, he warned.
Present on the occasion were Mussoorie Police station In-charge Devendra Aswal and Executive Officer ML Shah.

Garhwal Post has established itself as a credible, balanced and forward looking newspaper in India. Based in Uttarakhand, the daily is read by the aware, socially and culturally responsible, high-income elite of society.
Contact us: info@garhwalpost.in
https://garhwalpost.in/dating-sites-for-middle-eastern/