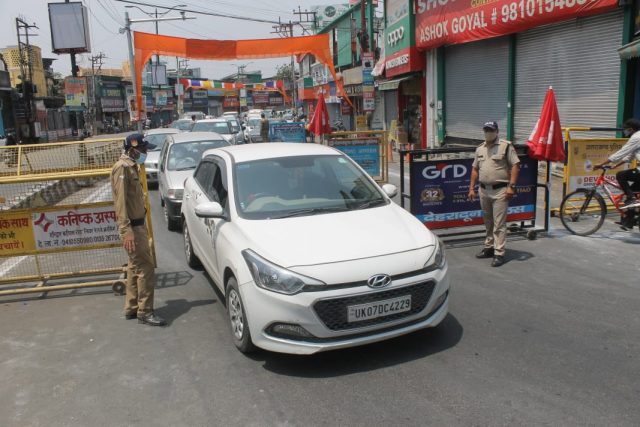 By Arun Pratap Singh
Dehradun, 1 May: Uttarakhand continues to be among the most Covid affected smaller states in the country, with 5493 fresh Corona cases in past 24 hours and 107 deaths. At the same time, the much promised free vaccination for the age group 18-45 failed to begin in the state due to delay in arrival of the vaccines. A large number of persons in the age group 18-45 have registered themselves for the Covid vaccination on CoWin portal but they will have to wait.
During this period, 107 deaths were reported in the state. Dehradun again lead the tally with 2266 fresh Corona cases in past 24 hours. Out of the total number of 11,526 tests conducted in Dehradun, 2266 positive cases were reported indicating a high positivity rate of 19.65 percent, while Nainital continues to test very low. Out of the total number of just 2325 tests conducted, 810 positive reports were detected indicating a very very high positivity rate of 34.83 percent. Clearly, Nainital needs to boost testing significantly though despite such a high positivity rate prevailing for past one week or more, testing has not been pushed in the district.
Haridwar too has reduced the testing from a high of over 15,000 just a couple of days ago, only 7929 tests were conducted today and 578 cases were detected during the past 24 hours. Rudraprayag was the only district to report double digit cases at 59 while even the remote districts like Bageshwar, Chamoli and Pithoragarh, all reported more than a hundred cases each in past 24 hours. What should also be a matter of great concern is the fact that reports of more than 28,000 test samples are still awaited. It is now taking much longer for the reports to be made available. In fact, some private pathology labs in the state have complained that a test fee of Rs 500 capped by Uttarakhand Government  for even home collection of the RTPCR samples and testing was not feasible and therefore they were unable to ramp up testing. They pointed out that elsewhere additional charges were permitted for home collection of RTPCR samples.
Meanwhile in the pandemic time, most helpline numbers provided by the administration for help in availability of beds, oxygen, ICU beds, medicines were not being picked up and the families of the Covid patients requiring oxygen, Remdesivir and other life saving drugs were having to run from pillar to post and even seek private help from acquaintances or on social media as the government helplined failed to provide any help. Also the reports of continued blackmarketing of oxygen cylinders and Remdesivir injections continued to come in from across the state despite the fact that the Drugs Controller officials along with the Police teams conducted raids at various places including pharmacy shops. No one has been arrested as yet by the administration. And it was Delhi Police which had raided a pharma factory in Kotdwar allegedly producing fake Remdesivir injections or labelling other injections with Remdesivir tags. Though SSP Pauri claimed that Delhi Police did not find any stock of fake injections in Kotdwar, the stock of fake injections was found by Delhi Police in Delhi itself and raids conducted as a precautionary measure. However, Delhi Police have meanwhile claimed discovery of fake injections from a Kotdwar factory.
Photo caption:
Doon Police seized vehicles today in Doon that were violating Covid-19 curfew guidelines. Pic: Vikram.