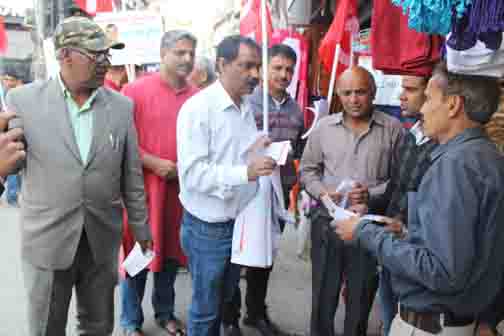 By OUR STAFF REPORTER
Mussoorie, 4 Apr: Activists and leaders of the Communist Party of India – Marxist undertook an election campaign to support their candidate, Rajendra Purohit, from the Tehri Lok Sabha constituency. The workers urged people to support and vote for their candidate.
CPI(M) leaders Vijay Rawat and national member Rijju Krishnan said the Bharatiya Janata Party and Prime Minister Narendra Modi had acquired power by making many tempting promises to the people of the country five years ago, but forgot all of them after winning. BJP had promised one-and-a-half times the cost of production for farmers, increasing 200 days works of labour under MNREGA scheme and many others, but had forgotten all the promises. He said that due to the wrong policies of the Modi government, the people of every section of society were facing lots of problems. They said that the Communist government in Kerala had established new dimensions of development and many big decisions has been taken for the welfare of the workers, farmers and others in the state.
They further said that the Communist Party of India strongly opposed the economic policies of, both, the Congress and the BJP. He said that the two parties encouraged privatisation to exploit workers. BJP, in its five-year tenure, had weakened the Constitution and Democracy in the country. They alleged that the BJP Tehri Lok Sabha MP and present candidate had never worked for the development of the region and people of the area were not happy with her and she would be taught a lesson. They asked the people to vote for their candidate, as the party had always worked for the benefits and for the rights of labour, the poor and common people.

Garhwal Post has established itself as a credible, balanced and forward looking newspaper in India. Based in Uttarakhand, the daily is read by the aware, socially and culturally responsible, high-income elite of society.
Contact us: info@garhwalpost.in
worst dating sites top asian dating sites