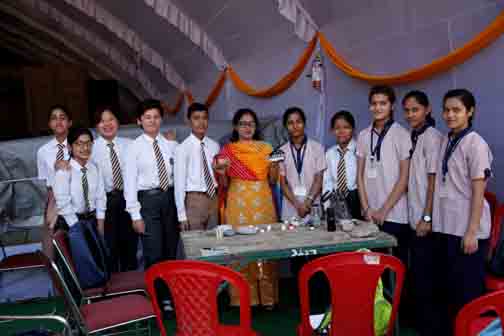 DEHRADUN, 17 Oct: Craft Workshops with Master Craftsmen were held at the Virasat Festival, here, today. True to the name Virasat, children from the city schools are participating in huge numbers in learning the traditional as well as current art and craft forms at the various workshops being held at Virasat Village by the expert crafts persons. The workshops in the traditional art of Madhubani Painting, Kite making, Stone Art, Rangoli, Mehndi were just a few in which the children participated. Nearly 200 children from Doon Presidency, SGRR School, Him Jyoti and BS Negi School participated. This workshop will be conducted for two more days and more school children will take part. Panch Naad, the all women acoustic orchestra from Madhya Pradesh, performed in the evening. The cosmic sound of five elements constitutes ‘Panch Naad’. The manifestation of it in the form of instrumental composition comprised the Tabla, Sitar, Violin, Santoor and Dhola Tabla played by the all women group: Shruti Adhikari, Samita Bajpai, Chitali Shevlikar, Sangeeta Agnihotri and Mitali Vinchurkar from Bhopal and Indore. The performance started with Raag Kirwani in Aalap and they continued to play in Vilambit Teen Taal and jugalbandi between the different instruments. This was followed by Hindustani Vocal by Bhuvanesh Komkali. Bhuvanesh Mukul Komkali is from Indore and his initial training in music was received from his father, Mukul Shivputra, and grandfather Pandit Kumar Gandharva, and later he came under the tutelage of his grandmother, Vasundhara Komkali, at the Kumar Gandharva Sangeet Academy, Dewas, Madhya Pradesh. Presently he is receiving training from Madhup Mudgal at the Gandharva Mahavidyalaya, New Delhi. A recipient of the Junior Scholarship from the Department of Culture, Government of India, and a ‘B’ High grade artist of All India Radio and Doordarshan, he has performed widely in many prestigious music festivals in India and abroad. He has lectured in many Universities also. Bhuvanesh has also composed music for a Hindi movie ‘Devi Ahilya’. Presently, he is engaged in preserving Pandit Kumar Gandharva’s music through digital technology. The craft workshops will continue tomorrow. At 11 a.m., there will be a presentation by Pankaj Rag on Composer Madan Mohan. In the evening, there will be sarod recital by Amir Khan, followed by Katak by Nivedita Pandya, and Malwi Lok Gayan by Sundar Lal Malwi.