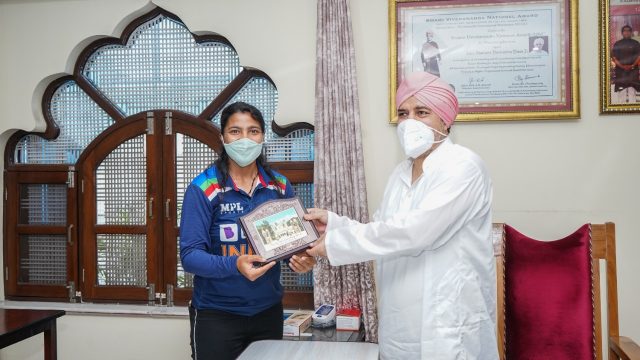 By Our Staff Reporter
Dehradun, 19 Jul: Member of Indian women Cricket Team and Dehradun resident Sneh Rana reached the Guru Ram Rai Darbar Sahib, here, today. She paid obeisance at the Darbar Sahib and was blessed by Mahant Devendra Dass. She was welcomed according to the traditions of the Darbar Sahib.
Rana has just returned from England after an excellent performance in the international cricket matches.
Sneh Rana reached the Darbar Sahib along with her coach, Narendra Shah, and family members. She shared the experiences of her England tour with the Mahant. Mahant Devendra Dass appealed to the Governments of Uttarakhand and India to make available the best facilities and resources to help her excel further. He said that every possible initiative must be must be taken to motivate the bright daughters of India.
It may be recalled that Sneh Ran has also been appointed the Brand Ambassador of Shri Guru Ram Rai University. Coach Narendra Shah told the Mahant that Sneh Rana used to practice very hard at the playground of SGRR Public School, Race Course.
Sneh Rana also shared memories of the moments spent with the SGRR family, the SGRR Public School ground and the miraculous innings played in England. She reiterated her deep faith in the Darbar Sahib, the Jhande Sahib, Guru Ram Rai and Mahant Devendra Dass. She offered ardas and sought the blessings of the Mahant in her future endeavours.
The Shri Guru Ram Rai University will soon organise a felicitation programme for Sneh Rana. The university will present an amount of Rs 1 Lakh and a Certificate of Appreciation to Sneh Rana. This was stated by Shri Guru Ram Rai University Vice Chancellor Dr US Rawat.

Garhwal Post has established itself as a credible, balanced and forward looking newspaper in India. Based in Uttarakhand, the daily is read by the aware, socially and culturally responsible, high-income elite of society.
Contact us: info@garhwalpost.in
https://garhwalpost.in/men-dating-trans-women/ gay bilatin men cheap save the dates