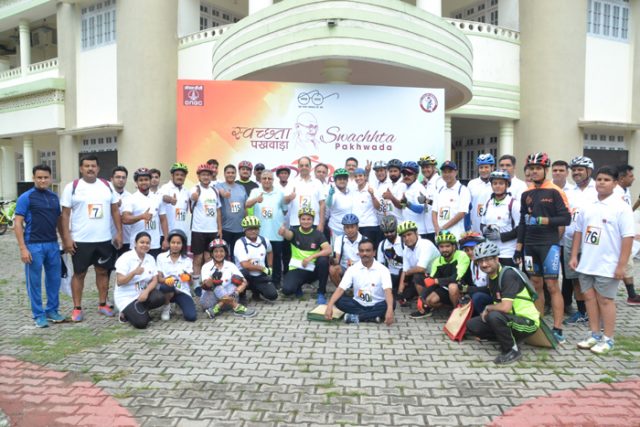 DEHRADUN, 5 Jul: A Cyclothon to create awareness regarding cleanliness was organised today at ONGC Headquarters as part of the ‘Swachhta Pakhwada’, which is being observed from 1 to 15 July. The Cyclothon was flagged off from the Subir Raha Oil Museum, Tel Bhavan, by Executive Director-Chief Employee Relations, Alok Misra along with senior dignitaries Executive Director- Chief Human Resource Development, VK Verma, Head, Employee Relations, AP Singh and Head (Recruitment and Promotions) Shashi Rajan. The cyclists, pedaling through Garhi Cantt and IPE Chowk, reached ONGC Officers’ Club, where the Cyclothon culminated. The event was coordinated by ONGC Cycling Association, Dehradun, along with the CSR team. Participants of the Cyclothon were given tokens of appreciation by the dignitaries for their keen participation in the event. Chief ER and Chief HRD highly appreciated the event. The motto of the Cyclothon was “Ride with Pride for a better tomorrow”. Around 200 ONGCians, their families and members from cycling groups of Dehradun showed immense interest and enthusiastically participated in the event. The Cyclothon was followed by a cleanliness drive conducted in nearby areas of ONGC Officers’ Club, ONGC Colony and Rajendra Nagar, Kaulagarh Road.